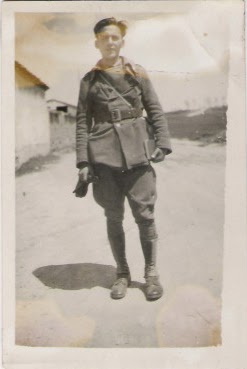 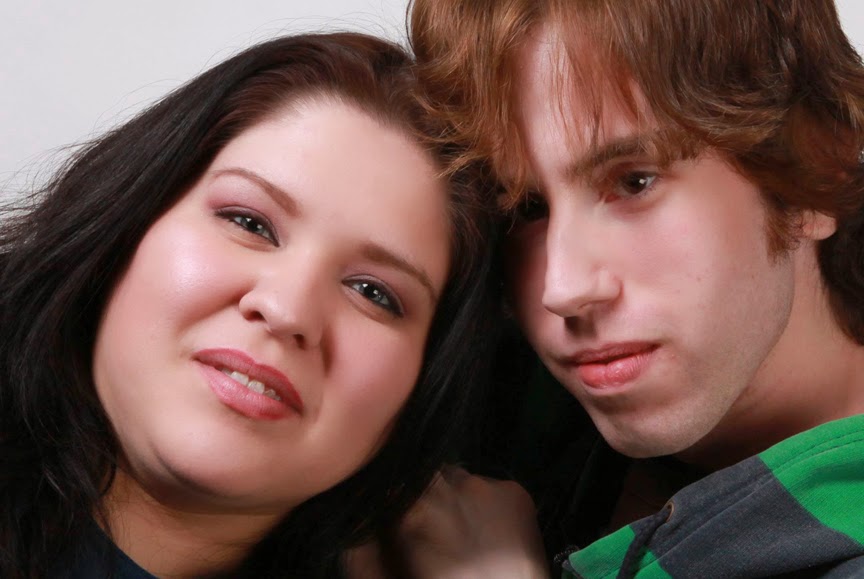 I have added several more links to the Wikipedia online newspaper archives page.  Most of them are free.  I hope some of these prove helpful in your research!

• Alberta, Canada:  Our Future, Our Past:  The Alberta Heritage Digitization Project, intends eventually to collect all Alberta newspapers.  Currently the years range from 1885 to 2001.  You can browse by year or location, but no search function is available.
• China (new country!):  ProQuest has made three partial years of the North China Daily News available through the Center for Research Libraries system.  As with all ProQuest databases, this is a paid site.  (The really big news with this newspaper is that the Shanghai Library has digitized more than 100 years [1850–1951], but so far the database is strictly in house.)
• England:  Lloyd's List, from the venerable Lloyd's of London, has an online archive going back 24 years.  This is also a paid archive.
• California:  A large collection of 19th- and 20th-century transcribed newspaper articles about the former town of Alvarado, now split between several cities in Alameda County.
• California:  The Grass Valley Daily Union from 1865–1884 (except for 1878) can be browsed online thanks to the Nevada County Library.
• California:  Neighborhood Newspapers of San Francisco is an effort to make several local newspapers more widely available through digitization.  Currently the focus is on issues covering the 1989 Loma Prieta earthquake, but the plan is to add historical runs for Grapevine, New Bernal Journal, Noe Valley Voice, North Mission News, Potrero News, Richmond ReView, El Tecolote, and Tenderloin Times.  More information about the project is available on the FoundSF Web site.
• Missouri:  The Scenic Regional Library has digitized and posted fourteen newspapers from Franklin, Gasconnade, and Warren counties, published between the 1870's and 1920's.
• Montana:  The Gallatin County Genealogical Society has posted an index of obituaries in local papers and Web sites from 1980–2013.
• New York:  Rensselaer Polytechnic Institute's student paper, The Polytechnic, is available online for 1869 and 1885–2001.
• New York:  The Troy Irish Genealogy Society has posted marriage and death indices from Troy newspapers from 1882–1885, and transcribed marriage and death notices and miscellaneous news items from the West Troy Advocate from 1837–1865.

How have newspapers helped you solve some of your genealogy research questions?
Posted by Janice M. Sellers at 6:39 PM No comments: 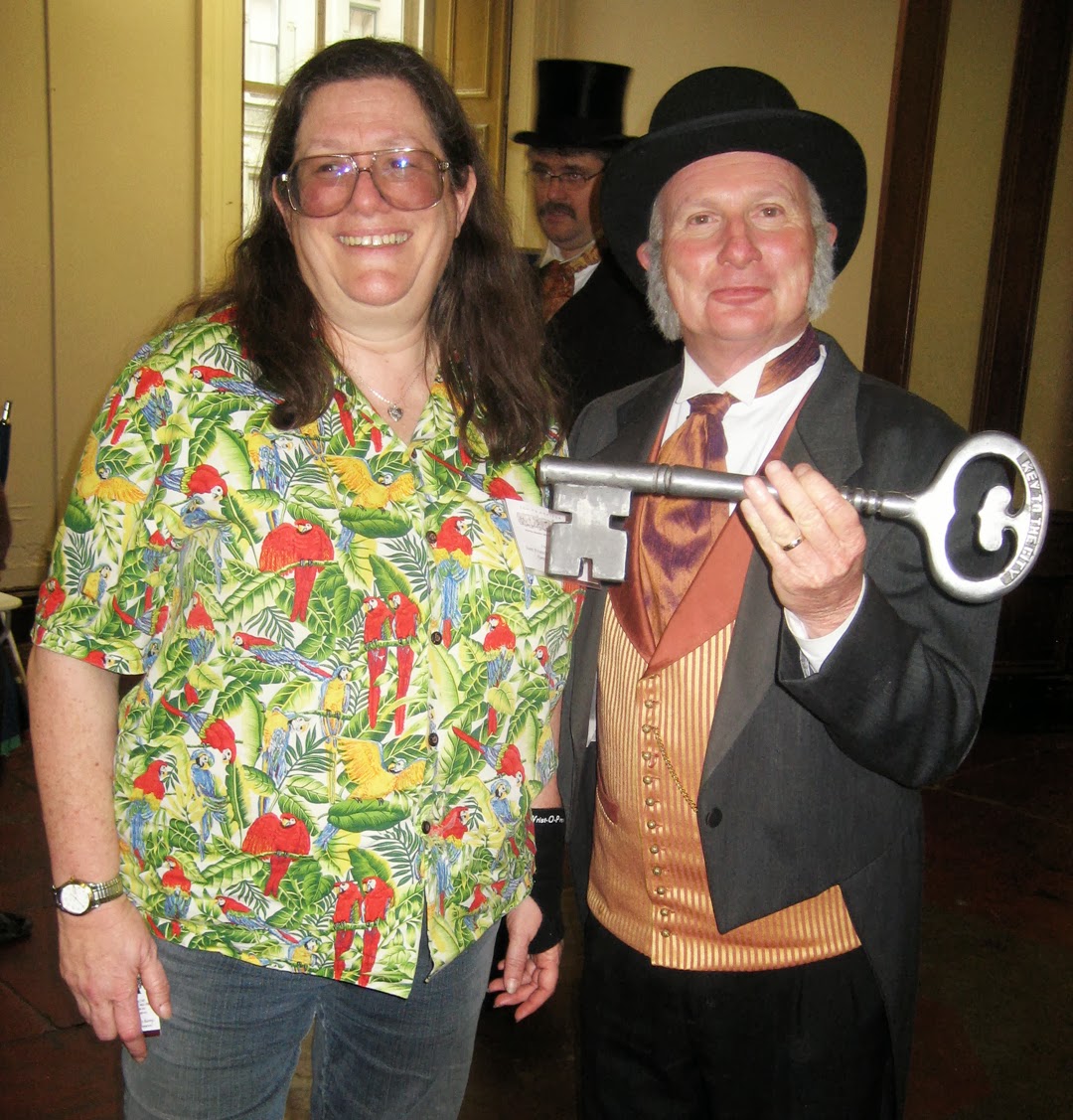 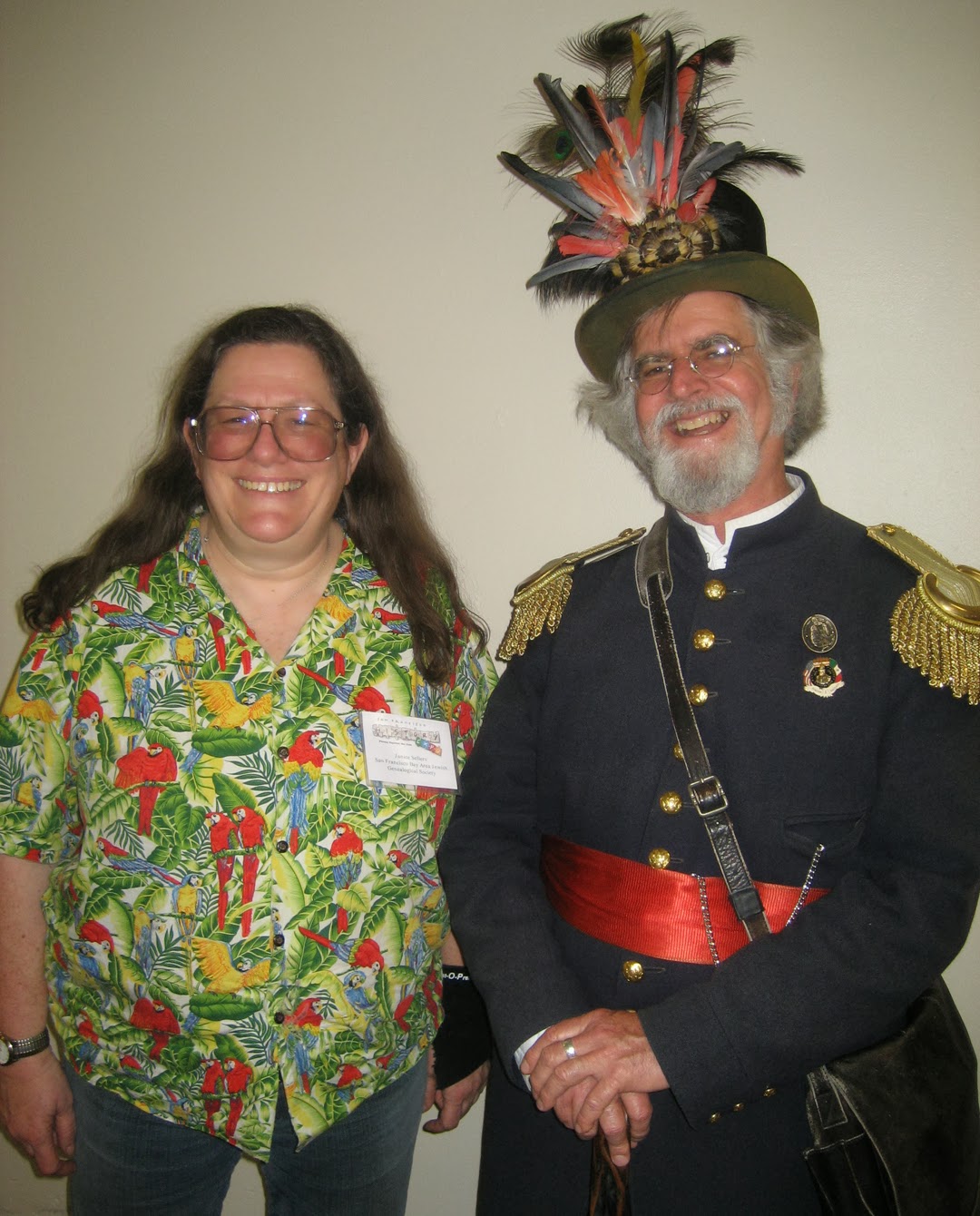 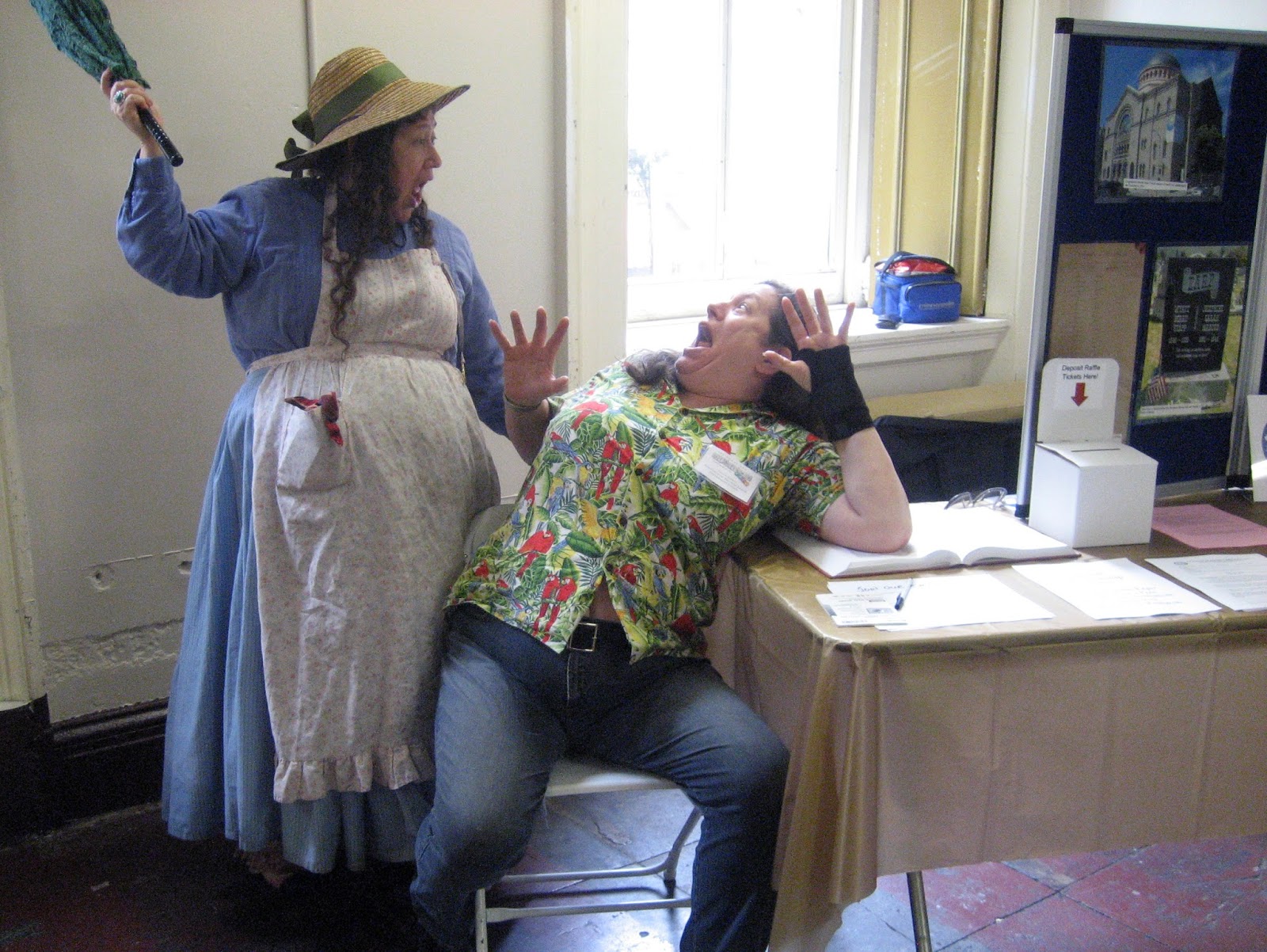 Photos courtesy of Sandra Huber. Thank you!
Posted by Janice M. Sellers at 10:02 AM No comments:

Microhistory and Macrohistory, Working Together

I think of history as having two different approaches, broadly speaking.  Microhistory is focused on individuals, the type of research that genealogists do.  We try to find as much information as we can about our ancestors and collateral family members so that we can learn about them as individuals.  Macrohistory (or just history) is about the world around individuals, the events and movements and eras that affected those ancestors.  Last weekend and this weekend I attended events with different emphases on history but that incorporated both aspects, and I started thinking about how the two work together.

The weekend of March 1 and 2 I was at the San Francisco History Expo.  This event primarily is about macrohistory.  More than 60 groups participated, most of them focused on topics such as San Francisco neighborhoods, different ethnic groups, and organizations such as the fire department and the Masons.  Their information was about the history of the times the groups were in San Francisco, how they reacted to changing times, significant historical events that occurred in the city, and similar subjects.  A few reenactors walked through the Expo portraying historical characters from San Francisco's past — Emperor Norton, Adolph Sutro, Domenico Ghirardelli.  There were also a small number of genealogical groups.  We microhistorians talked with people about how they could learn more about their ancestors and their lives in San Francisco and sometimes pointed an attendee in the direction of one of the history groups that might have helpful information.

On Saturday, March 8, I was at the 9th annual African American Family History Seminar in Sacramento.  This was a genealogy event, so most of the sessions focused on tools and techniques that could help people find their ancestors and learn more information about them.  Tom Stratton, the seminar's keynote speaker, however, is a (macro)historian who spoke about Lieutenant Colonel Allen Allensworth and the town he founded in California.  Stratton discussed the historical events that occurred during Allensworth's life and how they affected him and informed many of the choices he made.  Stratton also talked about Allensworth State Historic Park and the interpreters (historic reenactors) who help recreate the feeling of the town and bring alive its history.

To really bring a historical character alive, an interpreter/reenactor — such as the ones at the San Francisco History Expo and Allensworth State Historic Park — wants to learn as much detail as possible about the person he is portraying.  But he also needs to understand the history of the times in which that person lived.  Think about yourself:  You are influenced and affected by the history and culture of where you grew up and where you live.  If you were living in a different country, a different era, you wouldn't be exactly the same person you are now.

An excellent example of someone interpreting a historical person is Hal Holbrook, who has continually received great acclaim for his portrayal of Mark Twain in his one-man stage show.  Holbrook has studied Twain in depth, but he also studied the times in which he lived, not only to learn what influenced Twain but to think about how Twain reacted to what happened around him.  Because of that he can portray Twain as a real person and react in character.

That blending of microhistory and macrohistory can help us understand our ancestors better.  It's natural to focus on finding as many pieces of information as possible about them as individuals, but we also need to study the greater historical times they lived in, because that helps us understand what affected them and why they made some of the choices they did.

I remember one day when I was working at the Oakland Family History Center someone came to the desk to ask for help in solving a question about her ancestors.  After listening to her description of the problem, the background of the family, the location, and the period, I told her there were not a lot of records available for that area at that time, but that she should look at the history of what was going on there to learn what was bringing people there for settlement and which groups were there.  She looked shocked and said, "I have to learn about history to do genealogy?"

Well, no, you don't.  You only have to learn about history if you want to be successful with your genealogy.
Posted by Janice M. Sellers at 8:15 PM No comments: 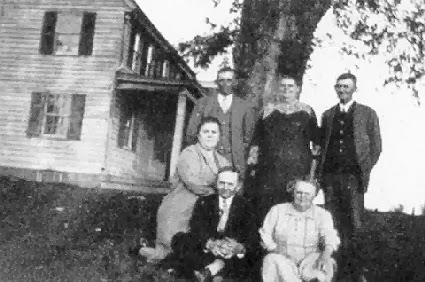 Posted by Janice M. Sellers at 3:49 PM No comments:

In February, for Black History Month, I wrote about episodes of the PBS program History Detectives that related to black family history.  This post, about History Detectives segments discussing black history in general, I really intended to finish in time to be a companion piece for Black History Month.  Unfortunately, real life intruded (going from afternoon to graveyard to early morning shifts at one of my jobs, all during the month of February), so it's just a little (a teeny bit) late.  As with the earlier post, I've listed these in chronological order of the events being discussed.

A family living in Reliance, Maryland, wants to know if their house once belonged to the infamous Patty Cannon (c. 1760-1829), who was called the "most wicked woman in America."  Her gang, which included several family members, kidnapped free blacks and sold them into slavery in the South.

A family "sheet" belonging to two brothers in Michigan might actually be a historically significant abolitionist flag.

Two stamp collectors bought a box of old letters and found two addressed to William Blackford in Washington, D.C.  One is from Blackford's brother, John, who wants to command a black U.S. Army unit during the Civil War.

A man has found a songbook in his late mother's belongings.  Dated 1867, it may be the first published collection of black spirituals.

Most vaudeville performers in the early 20th century were white, but not only was one ventriloquist black, his dummy was also.  John W. Cooper was important for his pioneering performances but also for how his legacy was carried on.

A U.S. Army vet wants to learn if the flag she owns is connected to a little-known black unit that fought under the French during World War I.

A black and white stamp purchased at a flea market says "Save the Scottsboro Boys" and "one cent."  It doesn't quite look like a real postage stamp, and the purchaser wants to know who made it.

A woman inherited paintings created by her aunt and thinks they may have been studies for murals commissioned by the WPA.  The studies show blacks working in medicine and transportation.  The woman wants to know if any of the studies actually became murals.

Nora Holt was a singer associated with the Harlem Renaissance.  A man has inherited Holt's autograph book, which includes signatures from presidents Warren Harding and Calvin Coolidge.

A man in Brooklyn found boxes of sheet music in a dumpster.  Among them were what appeared to be the original printing plates for Duke Ellington's famous "Take the A Train."

A baseball fan found a scorecard for a game between the Majors' All Stars and Jackie Robinson's All Stars.  The game took place before Robinson broke the color barrier in Major League Baseball.

A woman's father told her that a saxophone he owned was originally Charlie Parker's.  Her father said that Parker had pawned the sax, and he went to the pawn shop to buy it.

John Henry "Pop" Lloyd was a legendary shortstop in the Negro Leagues.  The History Detectives investigate why a baseball field in Atlantic City, New Jersey, was named for him in 1949, when the U.S. was still highly segregated.

A 1950's comic book titled Negro Romance was bought at an auction.  Very few comics at the time had any black characters, so an entire comic book is extremely unusual.

A man in Winston-Salem, North Carolina, saw two F. W. Woolworth signs for sale on Craigslist.  He thinks they are from the local Woolworth store that had a desegregation sit-in in 1960.

A viewer believes that a home in the Bronx was the birthplace of hip-hop in 1973.
Posted by Janice M. Sellers at 3:39 PM No comments: