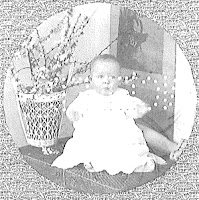 My sister, who works in a university library, contacted me several months ago about an original 1921 U.S. passport that had been in her office for several years.  It had come with some donated materials.  She didn't know what to do with the passport, but she thought it was cool and knew it shouldn't just be thrown away, so she asked me for suggestions.  I told her I would try to find a descendant to whom the passport could be returned as a family heirloom.

The passport was for a married couple.  They had gone to China because the husband had a job teaching.  They had filed for an extension, and the extension included their baby daughter who had been born abroad.  I found the family in the 1930 U.S. census and discovered the couple had had three daughters.  Of course, I had trouble finding the daughters because they had married and changed their names!  I did discover the family had moved to California and found death dates for both parents and one of the daughters, but then got stuck.

I looked for family trees online and found three that looked credible.  I contacted the owners of the trees and all three got back to me, which was a pleasant surprise.  What also surprised me is that the first two to respond were not related at all to the families whose trees they had posted.  Is it common for people to post family trees of people they're not connected to?

On Thanksgiving Day I received a message from the owner of the third tree, who actually is related to the family.  Amazingly enough, the young daughter shown on the passport is still alive, now 88 years old!  Apparently, this passport may be the only surviving documentation from the time showing that she was born in China.  I'm going to mail the passport to her next week.

It feels so good to be able to send a piece of a someone's history back to her!  I don't know how it ended up with papers donated to a university, but I hope it stays in the family now.
Posted by Janice M. Sellers at 11:51 PM