Label Those Photographs (and Check Your Information) 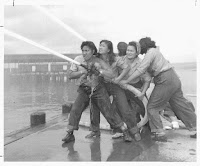 When I talk to people who are beginning their family history research, I often suggest one of the first things they should do is try to find out who is in any old photographs and to label the photographs with who is in them, when and where they were taken, and any event associated with the photo.  Once older members of the family have passed away, many people are left with boxes of photos and no one left who recognizes anyone in them.  But it's also good to verify information as much as possible.

On December 7, 2011, MSNBC posted a photo online of four women holding a firehose.  The photo was labeled as showing four women fighting fires after the attack on Pearl Harbor, as per information from the Getty Images collection, but did not give the names of the women.  MSNBC asked if anyone could identify them.  A reader contacted a writer and former librarian who had planned to write a book about the lives of women during World War II, and she was able to find the photo within minutes in the Hawaii War Records Depository.  The entry gave the names of the four women and didn't say anything about the attack on Pearl Harbor.  The next photo in the online archive showed the same four women obviously on the same day, wearing the same clothes, but in a less dramatic pose.  MSNBC posted a follow-up on December 12; they tracked down the lone surviving woman of the four (she is now 96 years old), who explained they were being trained to use the firehoses but were not doing so on December 7.

Now, this particular photograph generated a lot of controversy, and some people claimed it was a fraud.  While it is unlikely your family photographs will create that kind of situation, it is possible some family members will disagree about who is in a photo or when it was taken.  Rather than taking sides, try to find out as much information as you can and talk to as many relatives as possible.  Then analyze the information and come to a conclusion, and share your reasoning with everyone.  You may still have some disagreements, but at least everyone will know how you came up with the answer you did.
Posted by Janice M. Sellers at 11:50 AM