So where did you say East Friesland was? 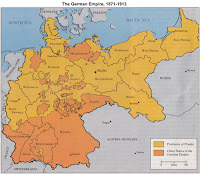 It's always especially fun for me when I start research on a new family, because I tend to find a lot of records fairly quickly and the discoveries come fast and furious.  And when the research is in areas that are new to me, I learn interesting new things.

In this family, the paternal grandfather was from East Friesland, an area of Germany considered to be somewhat backward and populated with "country bumpkin" types.  His adult grandchildren identify strongly with East Friesland because they were close to their grandfather and have visited his home town there multiple times.  They were quite surprised when I discovered that their paternal grandmother's father's side was solidly from Bavaria, the traditional antithesis of East Friesland.  Apparently it's kind of like saying that a North Carolina hillbilly hooked up with a Manhattan socialite.

I found the grandfather listed on a Hamburg ship manifest, where his nationality was listed as "Preussen" (Prussian).  What, they weren't German?  Following up on this led to the information that East Friesland was politically part of the Kingdom of Hannover (today the state of Niedersachsen [Lower Saxony]), which was annexed to the Kingdom of Prussia in 1866.  So yes, the East Frieslanders were counted as Prussians!

And then there's the question of just how "Frisian" the East Frieslanders actually are.  Some current research hypothesizes that Angles and Saxons overran the area centuries ago and that the people there today have neglible or no Frisian heritage.

Isn't genealogy great?
Posted by Janice M. Sellers at 7:24 AM