Reappearance of the War Bride 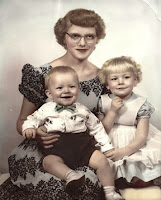 Last December, I posted about the story of a war bride who disappeared, which was published in The Oregonian.  Yesterday, The Oregonian published the epilog to the story:  The fate of the war bride has finally been learned.  Esther escaped her abusive relationship and made a new life on the other side of the country.  Lilly Oddsdottir, who helped piece the information together previously, found her family.

I have to admit I didn't think Esther had survived her relationship in Oregon.  I'm so glad to read that this story had a happier ending.
Posted by Janice M. Sellers at 8:22 PM