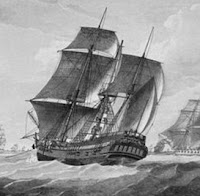 Sotheby's will be auctioning an unusual item on December 12:  a gaol [jail] book from 1790 listing English prostitutes who were transported to Australia on the ship Lady Juliana.  This ship brought the first large group of female British settlers to Australia and is apparently well known in Australian lore, not least for its reputation as a floating brothel.  Several of the women must have descendants who are alive today; it's suggested that one of the women might have tens of thousands of living descendants.  I really hope that one of them will be the lucky winning bidder.

The Sotheby's description of the lot says that it is the property of the Law Society of England and Wales, which sounds like a fairly serious group.  The Daily Mail has an article about the book, which states that the book "has come to light" but doesn't explain just how that happened.  C'mon, guys, how does someone just come across a book like that?  Where has it been hiding for the past 200+ years?

And please tell me that the names will be transcribed and entered into a database?
Posted by Janice M. Sellers at 1:34 AM