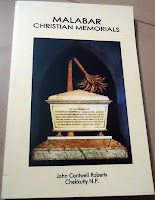 Earlier this month a new book on Christian burials and memorials in towns of the Malabar coast was published.  Malabar:  Christian Memorials 1737–1990 was written by Dr. John C. Roberts, a social anthropologist, and N. P. Chekkutty, a journalist in Calicut.  It details Portuguese, Dutch, French, and English gravestones in the region. The book includes a transcribed list of Europeans buried in several cemeteries in Kannur, Thalassery, and Mahe during the past two centuries, based on burial registers maintained in various churches.

There is information about European regiments and native troops stationed at the Cannanore Cantonment and details on deaths in the armed forces.  Most entries have information on the cause of death.

The book was published by the South India Research Associates (SIRA), a network of researchers and scholars registered in New York.  It has two maps and many photographs.  The current publication is a limited deluxe edition with historic illustrations.  It can be ordered through info.sira@yahoo.in; the order will be processed through Thejas Books in Calicut.  A less expensive second printing is scheduled to be available on Flipkart in India and Alibris internationally in the near future.

Dr. Roberts has finished a second book, this one on churches and planter burials in the Nilgiri Hills.  Plans are to release it in early 2014.  He is now working on other areas of Malabar, including Portuguese burials and the Dutch Cemetery at Kochin.

Some of Dr. Roberts' research led him to Thrissur, where the tombstone of a man with a family connection to Christopher Columbus is now located.  The article mentions that all this information being collected could be good for tourism, as people look for where their ancestors are buried.  Gee, you think?
Posted by Janice M. Sellers at 11:41 PM