Did the 1918 Flu Pandemic Affect Your Family? 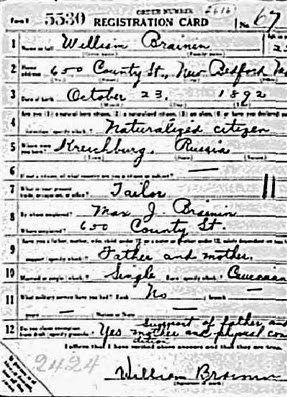 The influenza pandemic of 1918 killed millions of people throughout the world.  In the United States, one of the groups hardest hit was servicemen drafted into the Army for World War I.  One member of my family probably caught the flu this way, and he passed it on to his sister and almost prevented my grandmother from being born.  At least, that's how the family story goes.

Velvel Brainin was the second-youngest brother of my great-grandmother Sarah.  He was born about 1892 in the Russian Empire, possibly in or near Kreuzburg (now Krustpils, Lativa).  He immigrated to the U.S. sometime between 1904 and 1910, most likely with his mother, Ruchel Dwore Jaffe Brainin (my great-great-grandmother), and the two youngest children, Pesche (later Bessie) and Benjamin (I still haven't found that ship manifest).  By 1910 the entire family was in the U.S., and everyone except brother David was living in New York City.  (David was in San Francisco, but that's another story.)

Velvel went by the name of William after his arrival here.  He registered for the draft on June 1, 1917 in New Bedford, Massachusetts, where he was working as a tailor with his brother Max.  According to his draft registration card, he was of medium height and build and had dark brown hair and eyes.  Once when my grandmother and I were going through boxes of photographs, she identified one photo as "my Uncle Willie in his Army uniform", but that photo sadly seems to have disappeared.

"Willie" died in New York City on January 26, 1920.  The death certificate lists the cause of death as influenza.  Since he apparently did serve in the Army, either by being drafted or by enlisting, there is a good chance he caught the flu while at boot camp, as many soldiers did.

Most of the above information is pretty straightforward.  Now comes the family story.

My grandmother told me that while her mother (the aforementioned great-grandmother Sarah) was pregnant with my grandmother, she caught the flu from her brother Willie.  Sarah became seriously ill and had to go to the hospital.  Both her life and that of my grandmother were in danger.  She supposedly had a lung removed.  When my grandmother was born and they both proved to be healthy, my great-great-grandfather the rabbi went dancing in the streets in celebration.

One interesting element to the story is that my grandmother always said that her uncle died before she was born, which was in 1919, so I had not put much effort into looking for him in the 1920 census.  When I finally found the Brainin family in the census, however, William was there, still alive and kicking.

To make sure I actually had the right guy, I searched in the New York City death index and found a likely candidate, who had died shortly after the family was enumerated in the census.  When I obtained the death certificate, it showed he was the right person.

So with one part of my grandmother's story disproven, what about the rest?  Medical records are pretty taboo in this country, so it is unlikely I would be able to gain access to them, if they have even survived (I have been told that medical records need only be kept for 20 years; most are destroyed after that, and my great-grandmother died 50 years ago).  So much for verifying the lung removal.  There might be an obituary for William in a local paper, which might mention the family story, but it would probably be in Yiddish—which I don't read.

Willie was certainly enlisted, not an officer, so his service file was probably burned in the 1973 fire at the National Personnel Records Center, but I should try asking for it just in case.  I'm not a descendant (not that he had any), however, which will limit what I can receive.  But if I can find out what unit he was assigned to or where he went to boot camp, I can try to track down morning reports that might mention Willie becoming ill with the flu and when it happened.  Then I could at least verify that part of the story.

Willie said on his draft registration that he was a naturalized citizen.  I also should try to get a copy of his naturalization file.  He doesn't seem to have become a citizen in New York City (or at least his name doesn't show up in the Italian Genealogical Group index), so it's possible he was naturalized while stationed somewhere else with the Army.  That would be another possible way to learn his unit and then look for morning reports.

The great thing about family stories is that they give so much texture to what otherwise can easily be a dry list of names and dates.  But not everything in family stories is necessarily true; sometimes things are "misremembered" over time.  It's good to try to verify the accuracy of as many facts as possible, because knowing the accurate information can affect your future research.  Don't just dump the story, though.  Record it as the impetus that started you researching in that direction.  After all, if you hadn't heard the story, you might not have looked for that information, right?
Posted by Janice M. Sellers at 10:30 AM