My Cuban Adventure, Part 1: In Search of Family History

For the past week I have been in Cuba.  The organized group with which I traveled was (nominally) focused on volunteer humanitarian work (more on that later), but I went primarily because I wanted to do some family history research.  What with U.S.–Cuban relations thawing and the likely upcoming rush to make Cuba an American playground (again) by next year, I figured I should take the opportunity while I could, because soon the place is likely to be overrun with tourists.

My research wasn't going to focus on people, because I have no relatives left in Cuba.  The cousins who lived there emigrated soon after Fidel Castro came to power in 1959 (almost all of them) or some years later.  Instead, I wanted to try to visit locations associated with family members, as no one has any photographs of any of those places.

The one absolute success I had was finding the Patronato Synagogue in Havana, where cousins from the Jewish side of my family used to be members.  I took photographs of the exterior and interior, and of plaques and photos inside.  I also spoke with a very nice man who did not recognize the names of any of my cousins, but considering how long ago they left, I was not all that surprised.

Later I was able to visit the Cuban Jewish Community center, which is next door to the synagogue.  This time I met Adela Dworkin, the well known president of the synagogue.  While speaking with her I discovered she knows one of my cousins, who was actively involved in the community.  Adela remembers when the cousin moved from Cuba to Israel.  It was nice to find a personal connection on my trip.

I also had two old home addresses for this side of the family.  The one on Calle Hospital (Hospital Street) in Havana doesn't seem to have panned out — there's an apartment building there, but it looks very blocky and post-1959 to me (see that on the left?).  I took a photo of it just in case, and also one of an older apartment building a couple of blocks up the street.  I suspect where the blocky building is now there used to be buildings of the older type.  I'm waiting to hear from my cousin to learn if either looks familiar.

Looking for the other address proved to be one of the more exciting things I did while in Havana.  Through my hotel's tourist information desk, I worked out an arrangement with Elaine, a hotel employee who happened to live in the same suburb (Guanabacoa) where the address is, to go with me and help me look for the building.  I learned that maps are not commonly used in Cuba; most people get around by asking others for directions.  So having someone who knew that area was going to be a big advantage. 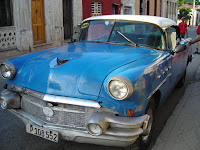 I arrived early for our scheduled excursion, because that's what I usually do.  She was working on Caribbean time, however, and showed up almost half an hour late, causing me a little bit of stress.  The taxi we took was a 1956 Buick Roadmaster, one of the classic old cars that Cuba is famous for.  It had a Toyota emblem attached to the grill, a Ford gear shift, and a very modern pop-out digital radio.  Heaven knows what kind of engine was under the hood — I was told that most of the old cars now have newer engines, because it's easier to keep them running.

And off we headed to Guanabacoa, to the east and a little south of my hotel.  On the way out of Havana we passed through an ominous-looking government checkpoint but didn't have to stop.  (I went through another of these checkpoints when my tour group took a day trip west of Havana.  I'm willing to bet there's one in the south direction to match.)  While the car belched gas and oil fumes (maybe this one had an old engine after all?), the driver tried to avoid as many potholes as possible, but there were just too many, and he still hit quite a few.

After half an hour of this entertainment, we reached Guanabacoa, and Elaine gave the driver instructions to find Estrada Palma (Palm Street), the street we were looking for.  When we found it, we of course turned the wrong direction.  After about six blocks of watching the house numbers go up instead of down, we turned around and headed back.  We eventually found #59, an apartment building with a ground floor and two upper stories with apartments.

Elaine asked the neighbors and some women walking out of the building if they recognized my cousins' family name, which no one did.  But one woman from the apartment building invited us to come upstairs and look around.  She let us visit her apartment and allowed me to take photographs of the rooms.  I checked the door frames of all ten apartments (five on each floor), and none had even a vestige of a mezuzah having been hung there, but it has been more than 60 years.  The woman was pretty sure the building had been there in the 1950's, so I think it's the right place, but I'll be checking with my cousin about this one also.

Another cousin, this one on my non-Jewish side, used to live in Cuba, but just to be different moved there after Castro.  Her then-husband decided he was a Communist, and they moved so he could participate fully as a party member.  Apparently things didn't turn quite out as he had expected, because they moved back to the U.S. within a couple of years.  I wanted to try to find the house where they had lived, which my cousin remembered was in Mariel la Boca and near a women's prison, but she couldn't find the address anywhere.  The closest I came was seeing a sign for the town from the highway.


My last foray into family history in Cuba actually had nothing to do with my own family.  On my final morning in Havana I walked to the Necrópolis de Colón (Columbus 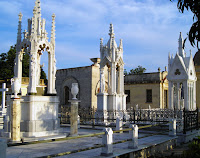 Cemetery), a huge Catholic cemetery more than 50 city blocks in size.  I had seen the entrance earlier during the week and knew I had to visit it before I left.  Beautiful monuments and mausolea are everywhere.  Although the tombstone style looks like they're above-ground burials, as in New Orleans, I was told they're actually below 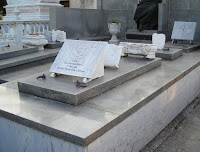 ground.  The large memorial tombstones are simply an ostentatious way of showing respect for the dead, apparently from a Spanish custom.  (I was also told that after a few years the bones are moved from the graves to an ossuary, because families are large and there is always someone else to bury in the family plot.)  The most interesting mausoleum was as big as a house.  It's for people who came from the same town, rather than being for one family. 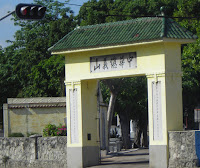 Near Necrópolis de Colón is a Chinese cemetery, whose entrance I saw the same day earlier in the week.  I ran out of time to visit it on Saturday morning because it appears to be on the far side of Colón and I had already walked a few miles, but I did manage to take a photo while the tour bus was waiting at a red light.  I didn't find the Jewish cemetery on this trip; I guess I'll have to come back!

While I was strolling through Colón, I wondered if a complete list of all the interments and/or the tombstones exists.  Somehow I doubt it.  Wouldn't that be an interesting project for FindAGrave?