The 1838 Census of Indian Key, Florida

You can find the most interesting things online these days.  Buried in The Senate of the United States, Third Session of the Twenty-fifth Congress, Begun and Held at the City of Washington, December 3, 1838, and in the Sixty-third Year of the Independence of the United States, Volume II, Containing Documents from No. 18 to No. 146 (printed by Blair and Rives, Washington: 1839), is the petition of Thomas Jefferson Smith to have Indian Key, Florida (when Florida was still but a territory) become an official port of entry for the United States (Volume 2, number 71, page 1).  Among the various claims and pieces of information Mr. Smith put forth to support his desire to have Indian Key made an official port of entry is a census of the island as of March 1838 (page 12).  And in that census, along with 98 white inhabitants, were enumerated 29 slaves and 14 free colored persons. 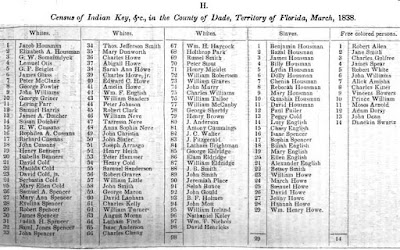 All the enumerated slaves save one carry last names that match white inhabitants of the island.  The name of Paul Fuiler, the one slave who does not, is similar to that of George Fowler.  Perhaps the name as published was in error, or perhaps Paul had his own name and was permitted to use it?

I am happy to recover these names and add them to the Slave Name Roll Project.  I hope that sharing these names and making them easier to find will help someone find an ancestor.

In addition to the census, the petition included a list of the landowners of Indian Key.  That list can be found on page 11, right before the census. 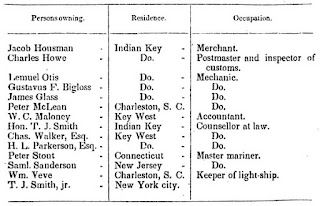 Many thanks to Linda Jack for telling me about this census.
Posted by Janice M. Sellers at 12:55 AM