Skeletons in the Closet: Illegitimate Births 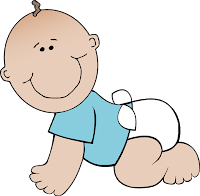 This is one in my occasional series of posts about those "touchy" subjects which may arise during your family history research, or which some relatives may try to have you ignore.  A page listing all of the posts in the series can be found here.

It isn't actually that uncommon to find an illegitimate birth, or more broadly a birth outside of a marriage, in a family.  Modern society doesn't have a lock on the situation; it's been going on for hundreds of years.  There are court cases in the 1600's for financial support for children fathered out of wedlock.  But depending on the family's social status and the specific circumstances, there may have been embarrassment at the time and more now when learning about it.

In some times and places, there wasn't even a stigma attached to having a child out of wedlock as long as the couple stayed together and raised and supported the child.

I recently confirmed that my paternal grandfather was born seven months before his mother married.  I don't know if his father was the man his mother married, as no name appears on the original birth registration.  The fact that my great-grandmother added that husband's name to the amended birth record 37 years later, 22 years after the man in question had died, doesn't exactly make me feel too confident about it.  I'm currently exploring other ways to investigate that and try to learn more definitively who my great-grandfather was.

Several years ago I learned that my grandparents were never married.  My grandfather was still married to his first wife but was a real charmer, and my grandmother apparently was ok with the situation.  My father was surprised to find out, but luckily he has a good sense of humor.

As young soldiers were going off to fight in World War II, many of them convinced their girlfriends to "give" just a little more, which led to several "surprises" about nine months later.  We have one of those in my family also.

The confusing part about researching an illegitimate child is figuring out what surname the birth is registered under.  When searching for my grandfather's record, my first two attempts were for Sellers.  When I learned that his parents had married after his likely birth date, I tried with his mother's maiden name, which I eventually learned was the name on the birth record.  Of course, I was looking for a boy, and I had no way of knowing then that his original record said that he was a female child; that doesn't happen very often, though.  (Though I do have a second example of it in my family:  My half-sister's maternal grandfather, whose name was Francis Maria [a good Irish Catholic name!], was recorded as a girl with the name Frances Maria.)  You just need to leave your mind open to multiple possibilities.

If this research involves relatives who have all passed away, it often doesn't cause too many problems among living family members.  If it's for people who are still alive, your access to records may be affected by privacy restrictions.  Then you'll probably have to ask those living family members for help, and they may not want to talk.  As usual, be diplomatic and nonjudgmental, but don't be surprised if you are rebuffed anyway.  You may simply need to put that particular research on the back burner for a while.

And speaking of skeletons in the closet, the Illinois State Genealogical Society is offering a free Webinar this Tuesday, November 10, on that very subject.  It will run from 8:00-9:00 p.m. Central time.  You can register for it here.
Posted by Janice M. Sellers at 10:01 PM