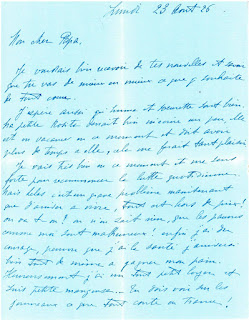 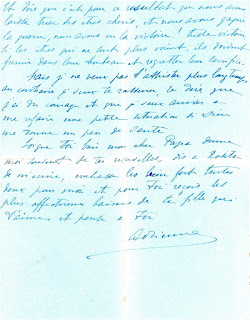 As with last week's letter, this piece of blue paper is 21 cm x 26.8 cm.  It also has faded along the lines where it was folded into quarters.  It has the same watermark as last week's letter, but this time I can read the entire thing:  SANDRINGHAM DUALIS PP (with the P's linked) PARIS.  I can't find a reference online to this paper manufacturer, but progress has been made.

This letter is again handwritten in French, addressed to Mon cher Papa, and signed by Adrienne.  Jean La Forêt's older daughter wrote him a second letter that he kept. 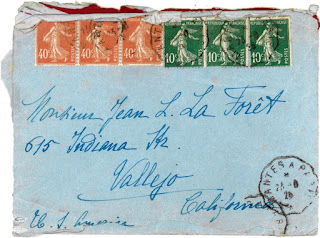 The envelope in which the letter was contained is 14.2 cm x 10.2 cm, as with last week's.  Its blue is a little darker than the stationery.  It is again addressed to Monsieur Jean L. La Forêt at 615 Indiana Street in Vallejo.  It cost 150 centimes to mail, although this time Adrienne used three 40 centime stamps and three 10 centime stamps, as opposed to last week's two 75 centime stamps.  But this envelope has something last week's didn't:  a legible postmark!  The postmark says "MANTES A PARIS", which I have not yet been able to determine the location of, but I have found references online.  It does seem to be in Paris.  The postmark date looks like 24 August 1926.

I will again transcribe and translate Adrienne's letter.  The envelope is easy enough to read.

I would like to hear from you and know that you are getting better and better, which I wish with all my heart.

I also hope that Emma and little sister are well.  Young Rosita should write to me a little, she is on vacation now and should have more time, it would make me very happy.

I am doing well currently and feel ready to start the daily struggle again.  But this is a big problem now that to live, at what price!  Where are we going?  We know nothing, with the pitiable ones like me so unhappy!  In short, I have courage, and if I am healthy I will be successful in earning my keep.  Luckily I have low rent and don't eat much.  You see on the news how much everything costs in France!  And to say that it is for this that we have allowed dear people to be killed, and we won the war, we had the victory!  Sad victory if the people we no longer see must shudder in their tombs and regret their sacrifices.

But I don't want to make you sad any longer, I want to reassure you, to say that I have courage and that I want to redo a small situation if ???? give me a little health.

While you ???? my dear Papa, give me lots of news, tell Rosita to write to me, give big kisses to the two of them from me, and for you loving kisses from your daughter who loves you and thinks of you.

I'm very frustrated that I was totally unable to decipher two words in this letter.  I have enlarged the high-resolution versions of these images on my screen and simply got nowhere.  Maybe someone else will be able to tell me what the question words are.

When you read this letter and compare it to last week's, it's hard to say whether Adrienne had heard from Jean in between.  This letter repeats a lot of what was in the first letter.  Maybe Jean was too ill to write to her.  And it doesn't sound as though Rosita had written to her, either.  She wasn't ill; maybe she was a flaky kid, or wasn't that crazy about her older sister.  Or maybe Jean didn't relay the message?

It's nice that Adrienne sent good wishes for Emma in this letter and sent her kisses also.  I doubt that Adrienne thought of Emma as her stepmother in any way, but she's maintaining good relations.

Adrienne didn't include her surname anywhere, so we still don't know if she was married or single.  At least with the postmark we know she was in Paris.  And it does sound like she was taking the traditional August vacation and was getting ready to go back to a normal work routine.

And this is the last item I have in my treasure chest for Jean.  I need to look at my documents to determine who is next up on the list to be analyzed.  In the meantime, I may take a break next week for Treasure Chest Thursday to make my plans.
Posted by Janice M. Sellers at 11:22 PM