Beginning this week, I'll be making a departure from how I've presented items previously in my ongoing investigation and analysis of the "treasure chest" of documents that relate to Emma Margaret (Schafer) Petit La Forêt and the people in her life.  Until now I've grouped documents by the person they primarily focused on.  Now I'm getting into the dispute over the estate of Emma's father, John Schafer, and whether Emma's mother, Elizabeth, and Curdt half-siblings stole what was rightfully Emma's inheritance.  These items mostly don't appear to be dated, and several documents have multiple copies, so it should be interesting to wade through them. 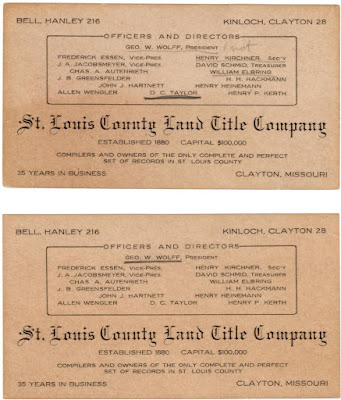 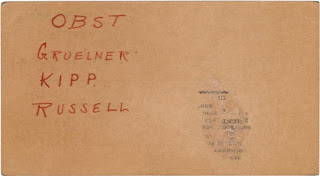 These two cards measure 4 1/2" x 2 1/2".  They are brown and are made out of a fairly substantial card stock, heavier than the average business card.  They are copies of the same card.  The bottom image is the reverse of the top card.

Both cards have names underlined in pencil.  The top card has a heavy pencil line under D. C. Taylor, the bottom name under "Officers and Directors."  Lighter lines can be seen under Geo. W. Wolff, President; Henry Kirchner, Sec'y; and William Elbring.  In addition, the word "not" follows Wolff's name.  The second card has only Geo. W. Wolff's name underlined.

On the back of the second card, four words that appear to be names have been printed in red ink:
Obst
Gruelner
Kipp
Russell

None of these names appears on the front of the card.  There is no context for who they are or how they are connected to the company, if at all.

This card back also has part of a newspaper page stuck to it.  I have not determined if I have the matching newspaper.

So far these cards are a mystery as far as their relationship to Emma.  Possibly (probably?) they were consulted in conjunction with Jean La Forêt's research into the history of the land that was part of John Schafer's estate.  Maybe some other document in this large file will have the company's name on it.

The St. Louis County Land Title Company was established in 1880, according to this card.  The cards have "35 Years in Business" on the lower left, so they were presumably printed in 1915.  I like the claim that they were "compilers and owners of the only complete and perfect set of records in St. Louis County."  (I wonder if that set of records still exists somewhere.)  Maybe Jean contacted them because of those records?

I searched to see if the St. Louis County Land Title Company still exists.  It does, but now under another name.

The name of the company is in agreement for the year the business cards were designed and/or printed.  The capitalization amount matches the $100,000 that's on the business cards, although that would mean it had not changed in the intervening fourteen years.  This report says that the original company was incorporated in 1901, whereas the cards say the company was established in 1880.  That isn't necessarily a contradiction, but it would mean that the company incorporated 21 years after it began.  I don't know how common (or not) that might have been.

In the case of Stevens v. Stevens (309 Mo. 130, 138 [Mo. 125]), Henry C. Kirchner is identified as the former secretary of the St. Louis County Land Title Company, so that's obviously the right company.  He was testifying as a witness in, of all things, a property dispute.

The case of Roth et al. v. Hoffman et al.  (234 Mo. App. 114, 124 [Mo. Ct. App. 1938]) includes a statement that a letter was sent by the St. Louis County Land Title Company on July 26, 1929, more than one year after the examination report states the company had changed its name.  Maybe someone was still using old letterhead a year later?

This little historical squib on the site of First American Financial Corporation (the company which bought Land Title Insurance Company of St. Louis) seems to confirm that all of this information is about the same company.  What's nice to read is that "Land Title maintains its own title plant, the oldest title facility in Missouri, containing documents dating back to the1840's."  Hey, maybe they do still have that "perfect set of records"!  Better yet, maybe they still have correspondence relating to the Schafer land dispute . . . .
Posted by Janice M. Sellers at 11:12 PM