I've come across several more genealogically oriented projects that are looking for assistance.  While you consider which seasonal toy drive you might want to contribute to, also think about how you can help with your time, knowledge, or family items.

Scribes of the Cairo Geniza is a project to sort, transcribe, and translate the fragments of documents discovered in the Cairo Genizah.  During phase I of the project, volunteers will sort fragments into different categories based on their script types, which offers clues to the type of text a fragment contains.  Having this information for the entire collection will allow the fragments to be sorted into workflows for transcription in phase II (launching in Spring 2018).

The results from Scribes of the Cairo Geniza have the potential to rewrite the history of the premodern Middle East, Mediterranean and Indian Ocean trade, and the Jewish diaspora.  Until now, most of the information has remained locked away in undeciphered manuscript fragments; less than one third of the 350,000 items have been catalogued in the years that the cache has been known to exist.  Virtually all scholars who have studied these texts have come away with a transformed sense of the history of the region and the long ties of intimacy among its people.  Students and the general public will have the opportunity to benefit from encountering these fragments online and from learning how to sort and eventually transcribe them as members of a citizen scientist community.  This project is a way for people with shared interests and different skill levels from around the world to meet in a common endeavor and unlock this storage chamber of ancient fragments.

If you or a relative spent any time in Kitchener Camp, a Jewish refugee camp in Sandwich, Kent, United Kingdom, immediately before or during World War II, the organizers of a site are seeking photos, memories, etc.  The intention is to establish the site and then find an institution to maintain it as a memorial.  More information can be found on the Web site, http://www.kitchenercamp.co.uk/.

The Port Hope Archives ((Northumberland County, Ontario, Canada) is asking for help in identifying soldiers and civilians iin its collection of photographs relating to World War I and World War II.  The primary focus was in connction with this year's Remembrance Day (Veterans Day here in the United States), but the archives continues to receive photos and welcomes any efforts to name the people in them.

Judith Ellen Elam is in charge of bringing an exhibit titled "The German Roots of Zionism" to Maui, Hawaii.  It will be on display for three months at the local Nisei Veterans Memorial Center, probably starting in August 2018.  Her group is trying to tie the exhibit in with a Hawaiian-Japanese theme as well.  The 522nd Field Artillery Battalion was activated February 1, 1943 at Camp Shelby, Mississippi as part of the 442nd Regimental Combat Team.  The unit was composed of both mainland and Hawaiian Japanese-Americans.  It is best known for liberating some of the Dachau subcamps.

Judith would like to make contact with anyone who has personal information (documents, photos, testimonials, etc.) about Jews liberated from Dachau subcamps by the 522nd Field Artillery Battalion.  The group would like to showcase the personal items in a display for the duration of the exhibit.  Please contact Judith at elamj@hawaii.rr.com if you can assist her.

The Columbus (Ohio) Jewish Historical Society is collecting the names of Jewish central Ohio World War I veterans who served in the United States armed forces, as well as those who served in other countries but had a link to central Ohio.  If your family had Jewish WWI veterans with a link to central Ohio, please contact Toby Brief at tbrief@hotmail.com or history@tcjf.org.  The society has collected more than 230 names so far and knows that there are more to be added.

In another focused memorial effort relating to World War I, Flinders University in South Australia is seeking contributions toward a public event planned for February 23 and 24, 2018 in Adelaide.  "South Australians in France" will bring together people with heirlooms and specialists of various types to discuss the stories behind those objects.  The project has a Facebook page where photos can be posted leading up to next year's event.

Arizona State University has received a grant that will permit it to hold workshops over the next three years to teach state residents how to care for their fragile family heirlooms and artifacts.  People will be able to digitize documents and will help build the state's community archive in the process.  A specific effort is being made to reach out to the Latino, Asian, black, and LGBTQ communities to make sure their stories are saved.

The Quincentennial Foundation Museum of Turkish Jews in Istanbul is planning an exhibition on Jewish life in Trakya/Thrace.  It will attempt to include all the localities, from Edirne to Gelibolu, including Tekirdag, Tchorlu, Silivri, Kirklareli (Kirk Kilise), Canakkale, Luleburgaz, etc.  It will range from ancient days to the present time.  The museum is asking for digital photos of people and artifacts, and stories for the exhibition.  If you have something that might be of interest, contact Metin Delevi at metindelevi@gmail.com.

David Sandler is working on a book about South African landsmanschaftn (sick and benefit societies) which will incorporate all brochures and booklets of societies he can obtain.  So far he has booklets from Keidan, Krakenowo, Ponevez and Malat and Districts.  Many associations were active in South Africa over the years, including ones related to Anykster, Birzer, Dwinsk, Keidan, Kelmer, Kovno, Krakinover, Kroze, Kupisker, Kurland and Riga, Lutzin, Minsk, Ponevez, Poswohl, Plungian, Rakishok, Schavlaner, Schawler, Shater, Tels, Utianer, Wilner, and Zagare.  The SAJBD archives at Beyachad are assisting David, but he is appealing to everyone for any publications from any of these South African societies.  You can contact him at sedsand@iinet.net.au.  Approximately 95% of the proceeds from David's books go to Arcadia (the JHB Chevra Kadisha) and the balance to Oranjia (CT) and the JDC. 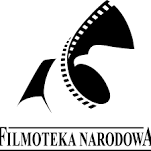 Agata Zalewska is the Film Collection Manager for Filmoteka Narodowa, the Polish National Film Archives in Warsaw.  As a state cultural institution, Filmoteka Narodowa is charged with protecting national cultural heritage in cinematography and dissemination of film culture.  Since its inception in 1955, the archives has been collecting and restoring films made in Poland, with the hope of finding copies of all films.  It has an almost complete collection of films made from 1946 onward.  Of course, more early silent films are missing than later films.

Filmoteka Narodowa has restored 75% of Polish feature films made between 1930 and 1939.  Besides films, it has extensive collections of promotional materials, books, posters, stills, and other materials related to films.  It makes its items available in its library; though movie showings, festivals, and lending; and though the production of print and digital media.  For example, it has published a DVD containing six restored shorts and an introduction about the early days of World War II for Poland, especially Warsaw; the DVD includes an English version with subtitles.

Agata’s primary interest at Filmoteka Narodowa is in finding missing Polish films.  Although it has become harder and harder to find films, and in many ways it is a race against time, Filmoteka Narodowa keeps turning up a gem here and there.  There is no telling where a film — full-length, documentary, or short — may be found.  For instance, in the late 1990's, a 1929 film was found in the Royal Archives in Brussels, and in 2003 a 1914 film was purchased from Filmmuseum in Amsterdam.  Others have been found in private collections stored away in attics and forgotten.

If you have any materials that would be of interest to Filmoteka Narodowa or know where any are or might be, please contact Abbey H. Brewer or Agata Zalewska.

(This information appeared in Gen Dobry! Volume XVIII, Number 5, May 2017.) 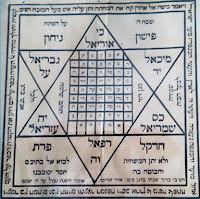 A Jewish Reform synagogue in London is looking for help in deciphering an amulet in its possession.  The amulet was "dumped anonymously in the shul."  While most of the Hebrew has been translated, the central letters are still a mystery.  Anyone who has an idea as to the meaning is invited to contact the synagogue.
Posted by Janice M. Sellers at 11:36 PM