My second former daughter-in-law and her current boyfriend (I have mentioned that my family tree is complicated, right?) recently were looking at some books being given away for free and found several pieces of paper money tucked into one of the volumes.  After we determined that, unfortunately, none of them was valuable because they were all in such extremely poor condition, they allowed me to keep two of the bank notes, which are in Russian rubles. 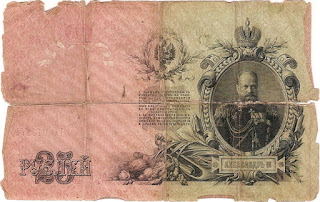 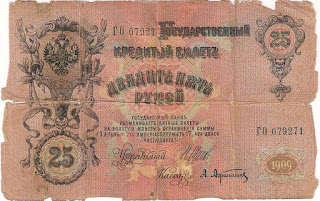 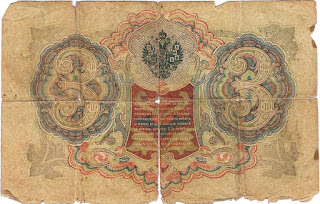 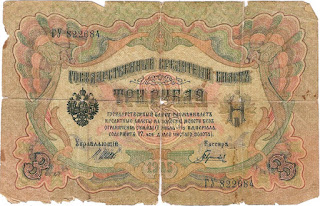 The second bank note is for only 3 rubles.  The front is highly decorative, and the back shows the note is from 1905.

Why would I care to keep these?  All of my mother's family lived in the Russian Empire for many generations prior to some of them immigrating to the United States in the early 20th century.  I have almost nothing from their time in Russia — a grand total of three photographs.  This is probably the type of money they would have used over there.  Kind of like collecting photographs of towns where family lived, this gives me a little more information about their lives.  It makes me feel a little more in touch with them to have these bank notes.
Posted by Janice M. Sellers at 7:04 PM