Today is the 100th anniversary of my maternal grandmother's birth.  Esther Lillian Gordon was born at 1575 Madison Avenue, Manhattan, New York.  She knew the address becaue that was the home of her maternal grandparents, Morris (Mendel Herz) and Rose Dorothy (Ruchel Dwojre) Brainin.  The reason she said that she and her two older brothers were born at her grandparents' home was because for her parents' first child, a boy, her mother had gone to the hospital, and the child was stillborn.  Blaming it on the hospital, my great-grandmother then had all of her children after that in her mother's home.


Bubbie (Yiddish for grandmother) told me she spoke Yiddish as her first language and that she didn't learn English until she began school.  I have her Hebrew primer.  I don't think she had a bat mitzvah, and she didn't really remember or use Hebrew later in life. 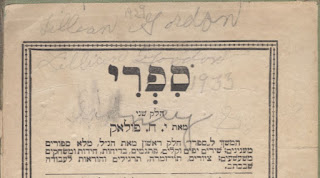 She did continue to speak Yiddish.  The only time I heard her speak Yiddish, however, other than some random words, was when she turned 80.  She had flown out to California for her birthday and was staying at my uncle's home.  Her best friend (my godmother) had come up from Southern California to help celebrate.  I was listening to them talking, and then their voices got louder, and it sounded like an argument — and suddenly I couldn't understand anything they were saying.  I was mesmerized — they were arguing in Yiddish!  It's still the only time in my life I've heard the language used in a conversation, albeit a loud one.  I wish I had been able to record it.
Posted by Janice M. Sellers at 9:48 PM