Last week, on July 24, my aunt called me to let me know that my uncle Gary had died that day.  He had been ill for some time, more than he had let on.

My mother was the oldest child, so both of her brothers were younger than she was.  Gary was the younger of the two, born seven years after his older brother and eleven years after my mother.  I asked my grandmother about that age gap once, and she admitted that Gary had been a little bit of a "surprise."

Gary's Hebrew names were Gershon Sholem.  Gershon was for his father's maternal grandfather (my great-great-grandfather), Gershon Itzhak Nowicki (Novitsky here in the United States).  Sholem is more complicated.  That was for his mother's sister-in-law's mother, Scheindel.

These are a few of my favorite memories of Gary.

My mother was close to her family, so my siblings and I grew up knowing her side of the family well.  Gary visited us several times while we lived in California.  He was kind of like an older brother for my brother, my sister, and me because the age difference wasn't that big.  He taught us to eat ketchup on our scrambled eggs and gave us the phrase, "You don't cheat fair!"

Gary even visited us while we lived in Australia.  He brought us a present, a book titled 101 Alphabets.  It was mostly alphabets in different fonts and styles, but one of the examples was the Greek alphabet.  So I learned the Greek alphabet when I was 10, because I thought it was pretty cool, and because my uncle gave us the book.  I think I still have the book.

One of my favorite photos of Gary is from when he was stationed in Vietnam with the U.S. Army.  I love snakes, and I still think this is a fantastic photo.  I don't know if Gary had a copy of this of his own, because when I posted it on my blog several years ago, he saved my digital copy and posted it to his Facebook page. 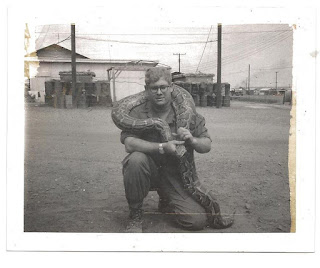 We will all miss Gary very much.
Posted by Janice M. Sellers at 7:48 PM