Friday the 13th: A Day for Superstitions 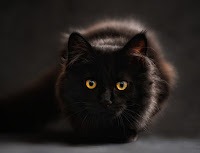 Many people are aware of the reputation of Friday the 13th as a day for bad luck in Western civilization and are therefore extremely afraid when the 13th falls on a Friday.  There's even a word for that fear:  paraskevidekatriaphobia (try to say that three times -- or should it be thirteen times? -- quickly).

My mother was superstitious about a lot of things, but she flipped a couple of superstitions to the reverse.  So she considered Friday the 13th to be a good luck day.  She also said that black cats were good luck.  I agree with that one, because I think of all cats as being good luck.

But she taught me several other superstitions that I still follow.

Lot of people have heard that it's bad luck to open an umbrella in the house.  That one you can come up with some reasons why you wouldn't want to do it, and maybe they morphed into it being bad luck to do.

My mother taught me that it's bad luck to put a hat on a bed.  She had a minor fit the day I graduated from high school, because when we got home after the ceremony I tossed my mortarboard onto my bed.  She ran over and grabbed it off the bed, kvetching at me about how I dared do such a thing.  I told her I hadn't really thought of the mortarboard as a "hat", to which she responded, "You put it on your head, don't you?"  So I've never put a mortarboard on my bed again.

It's also bad luck to put shoes on a bed.  I can't say that I remember putting shoes on my bed, but I remember my mother telling me I shouldn't do it.  I'm sure she would say that slippers count as shoes because you put them on your feet.  I may have put slippers on the bed once or twice, but never around her.

But what's with knocking wood?  Why is it good luck to knock wood?  Well, maybe not good luck, but a way to ward off bad luck.  You say something and then knock wood.  Yup, my mother did that a lot.

Do you know the one about salt?  If you spill salt, you're supposed to take some and throw it over your shoulder, or bad luck will come to you.  I've read that one probably comes from the days when salt was extremely expensive, so spilling it was wasteful.

Along with these starter superstitions that my mother provided for me, I have learned additional ones on my journey through life.

My mother said that if someone dies on a piece of furniture, such as a couch, you have to get rid of that furniture.  Sounding like a corollary to that is if someone is wearing shoes when he commits suicide, you can't use the shoes again but have to get rid of them.  That one didn't come from my mother but from a published family memoir.  (I've been told these are specifically Jewish superstitions.)

How about picking up a penny?  "Find a penny, pick it up, all the day you'll have good luck."  Sure, I learned that from my mother.  But someone later in my life (I think my friend Eileen?) taught me a second half to that rhyme:  "Find a penny, leave it lay, bad luck will follow you all the day."  I know it was Eileen who taught me a variation on this:  If the penny is face up, you're supposed to pick it up, because that's the good luck side.  If it's face down, you don't pick it up, but you flip it over so that the next person who comes across it can pick it up to get the good luck.  Bet you didn't know superstitions could be that complicated, did you?

I learned my first "foreign" superstition when I worked in the USC Industrial and Systems Engineering Department.  We had three Turkish professors in the department, and they all followed this.  You can't take a knife directly from someone's hand; if you do, the two of you will fight soon.  Once I gave a letter opener to Ali Kiran, one of the Turks.  He quickly put it down on the counter and lightly spat in its direction.  I, of course, asked him just what in the world he was doing.  He said he had taken the letter opener from me without thinking but then, realizing that it, in terms of superstitions, was essentially a knife (kind of like the mortarboard and a hat), he had to counter the bad luck -- which is done by getting the offending item out of your hand immediately and then spitting on it.  So I filed that away in the back of my head to remember.  Scissors count for this one also.

Another superstition I picked up somewhere (maybe the Chinese roommate I had for a while) was that spilling rice from your bowl is bad luck.  This sounds similar to the one for salt, because rice is such an important food staple that you wouldn't want to waste it.  I don't remember it there is a way to remedy the situation if you do spill some, however.

Do you know any interesting superstitions you learned in your family?
Posted by Janice M. Sellers at 2:03 PM