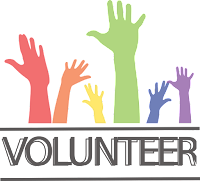 I knew I would end up doing volunteer work in genealogy after my move to Oregon, because volunteering is just something I do, and most of it nowadays has something to do with genealogy.

Less than a week after I arrived I called the Family History Center in Gresham, a mere three miles from my house, and asked if they were looking for volunteers.  No surprise, I was told, "Yes!"  I think I started my Tuesday morning shift the week after that.  It's a lot slower pace than when I was at the Oakland Family History Center in California, though.  We usually have only one or two patrons come in during the four-hour shift, and most of the time the help they need is computer-oriented rather than for research.  I'm still trying to figure out ways to "market" the FHC to get more people to come in and use our resources.

I didn't realize I hadn't posted about this when it started, and somehow a year has passed already.  Last fall I took on the job of coordinating the African American Special Interest Group (AA SIG for short) at the Genealogical Forum of Oregon.  The group began the year before, soon after I moved here, and I attended regularly.  The person who started the SIG determined she was trying to do too many things and asked for someone to take over leading the group.  Apparently I was the only person who volunteered.  I have had a small amount of pushback, because I am not black, but neither of the two people who complained was willing to do the work and everyone else is fine with me, so I'm still doing it.  I've been able to get some good speakers, and we've built a pretty solid group.

At the 2018 Federation of Genealogical Societies (FGS) conference, one of the sessions I attended was about records access for the genealogical community.  The primary genealogical group that keeps an eye on such issues is the Records Preservation and Access Committee (RPAC), which is a joint effort between FGS (which is now part of NGS), the International Association of Jewish Genealogical Societies, and the National Genealogical Society (NGS).  I felt so inspired by the presentation that I volunteered to be the contact person for the state of Oregon, which did not have one at the time.  One of my responsibilities is to let the committee know about "records access and preservation activities within the state, including both problems (issues) and successes."  So if you hear about any records access problems in Oregon, please let me know!

The most recent position I've taken on is Vice President of the Jewish Genealogical Society of Oregon (JGSO).  The board voted me in a mere week ago.  My primary job is handling programming for our meetings.  So far I've attended only one board meeting, although I have put together a long list of ideas for future programs.  All I need now is the schedule for the year (which someone else is handling), so I can try to find speakers!

Genealogy still relies heavily on volunteers in so many ways for societies to function.  I'm very happy I am able to help these groups.

What genealogy volunteer work do you do?
Posted by Janice M. Sellers at 11:54 PM