Telling Part of My Story: My Tattoo

It's my birthday today!  Yes, I have survived one more revolution around the sun and am now 58 years old.  Not the oldest person around, certainly, but since I had some people predict I wouldn't make it past 30, a lot better than it could have been.

One of the recurring themes for family history during the past few years has been that along with documenting all of those ancestors, the family genealogist should also remember to document his own life.  So starting today I decided I will write something about myself for my blog on my birthday.

After such a momentous decision, however, comes the next one:  what to write about?  What is interesting about me or my life?  Or interesting to me about my life?

I finally settled on a topic that in some ways is intrinsic to my identity, or at least to identifying me, but which for years my family knew nothing about.

I have a tattoo.  Meet Dart. 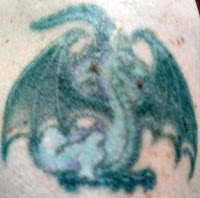 My inspiration for having a tattoo started when I was very young:  My father had a tattoo, and I loved it.  (It occurs to me now that I don't know if we have any photographs of it.  My sister and I think it was on his left arm.)  It was of Quetzalcoatl, the Aztec god of wind, air, and learning.  And I thought it was so cool, I wanted a tattoo also.

Actually following through on that took a long time.  I had to work myself up to it.  I found someone to do the artwork about 1983.  I wanted a dragon for strength.  I don't remember the name of the guy who did the drawing (which I admit is bad), but he let me have the artwork to take somewhere else.  My roommate at the time got a tattoo the day before she was going to be commissioned as an officer in the U.S. Navy (because you're not supposed to get tattoos after you've become an officer) and vetted the tattoo artist as doing clean work.  (It used to be you worried about getting hepatitis from an artist who didn't use clean needles, but by this time you had to worry about AIDS.)

The artist was Bob, and the place was Spotlight Tattoo on Melrose Boulevard in Los Angeles (and they're still there!).  I remember it cost $75 and took one hour for the tattoo.  But during that hour Bob asked me something like four or five times if I was okay.  He finally said he had never seen anyone stay so white for so long.  (Um, yeah, low pain threshhold, sorry, dude.)

So I finally had my tattoo!  And I loved it!

I named the dragon Dart after the dragon in the Roger Zelazny short story "The George Business" (I'm sure this transcription of the story violates copyright), which I read in the anthology Dragons of Light, edited by Orson Scott Card.  Dart was strong and intelligent, which I thought was a great combination.

And no one in my family knew about him until about 2007.

See, my maternal grandmother was Jewish.  And Jews traditionally aren't supposed to get tattoos.  I've always been told that you can't be buried in a Jewish cemetery if you have a tattoo.  And I didn't want my grandmother to know that I couldn't be buried in a Jewish cemetery, because I was the grandchild the most interested in our Jewish history.

So to make sure that Bubbie (my grandmother) wouldn't know, I figured the safest thing to do was not to let anyone in the family know, just in case it might somehow accidentally come up in conversation sometime.  I never wore anything sleeveless around family members.

And I managed to keep that secret.  Bubbie died in 2006.  At that point I had conditioned myself so well that it still didn't occur to me to mention it to family.

Until I watched a program that explained how a body was identified because of the tattoo the person had.  Investigators publicized the tattoo, and someone who recognized it was able to identify the deceased person.

I realized it was unlikely, but it occurred to me that if something similar were to happen to me, investigators could publicize the tattoo all they wanted, and no one in my family would know it was me.  Because they didn't know about the tattoo.

So I told them.  And I stopped worrying about being an unidentified body.
Posted by Janice M. Sellers at 11:53 PM