Today is the birthday of my older sisetr (technically half-sister), which I've decided to celebrate on my blog, just because I can.  Oh, the joys of having a blog devoted to family history!

Laurie is my father's daughter from his first marriage.  Because my mother was very family-oriented, my siblings and I probably would have known about her anyway, but we really got to know her and her mother because they used to live with my immediate nuclear family when I was a child.  We were very forward-thinking for the 1960's, I know.  There's even a photo of the four of us from 1968: 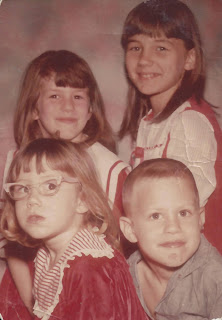 After Mary Lou and Laurie moved out of our house, they were in California for a while before moving back to the East Coast.  But I always stayed in touch with Laurie by writing.

When my family moved back to the United States in 1973 after two years of living in Australia, we also went to the eastern part of the U.S., albeiit in Florida, and I continued to write to Laurie.  My brother and sister got to know her better because at different times they both ended up in her area and were able to visit in person.

Then, in 1991, plans were for my mother, my brother, and I to visit San Antonio, where my sister lived, for a big family Christmas.  And my sister decided to surprise everyone else by having Laurie show up.

They plotted and planned.  The day I was scheduled to fly in, Stacy went to the airport to pick me up and had Laurie come along.  Laurie was waiting in the area through which passengers exited.

I was walking along, looking for Stacy, when suddenly somone I had just passed said, "What's the matter?  Don't you recognize your own sister?"

I turned and had to take a few seconds before I realized that Laurie was standing there in front of me.  She later commented with great joy about me standing there with my mouth hanging open.

She also mentioned that after this wonderful surprise had been planned, for several days she had been telling her coworkers, "I'm going to see my sister I haven't seen for 23 years!"  Which of course just begged for an explanation she was happy to share.

Because we had all four siblings together again, we commemorated the occasion with another photo, all of us in the same relative positions as in the one from 23 years prior. 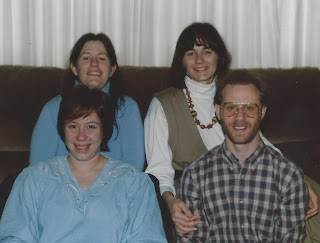 Which is one of my favorite family photos that I have.