Lily and Abe: A Love Story 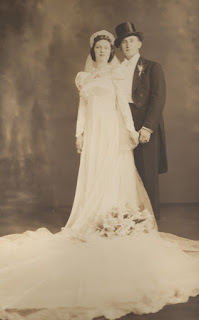 Lily and Abe were my maternal grandparents, Lillyan E. Gordon and Abe Meckler.  I knew them as Bubbie and Zadie, Yiddish for grandmother and grandfather.

Bubbie lived in Manhattan until shortly before 1930, when her family was enumerated in Baltimore, Maryland.  In 1940, her parents were enumerated in Brooklyn at 231 Livonia Avenue, and the census taker indicated that they were living in the same house in 1935, so sometime between 1930 and 1935 they moved there.

As far as I know, Zadie lived in Brooklyn from birth through to when he and Bubbie left New York and moved to Florida in the 1940's.  In 1930 he was at 420 Junius Street with his parents.  I have not yet found his father in the 1940 census (his mother died in 1936) so don't have a possible address for 1935, assuming he was living with his father at that time.

I don't know how my grandparents met.  Bubbie told me that they met on September 15, 1937 in Manhattan but didn't give me more details.  So they were both living in Brooklyn but met in Manhattan.  In 1940 they were at 484 Livonia Avenue, Brooklyn, only a couple of blocks from her parents.  The census shows that both were living in Brooklyn in 1935.

Bubbie and Zadie were married October 29, 1939, not in Brooklyn, not in Manhattan, but in The Bronx.  It was a double wedding, of sorts.  Bubbie's older brother, Alexander "Al" Gordon, and Roslyn "Rose" Rubin were married on October 28.  I was told that Jews are not supposed to have double weddings and so Al, being older, was married first and then Bubbie and Zadie were married.  Because the dates that I was told are from the civil calendar, that would suggest that Al and Rose were married just before midnight, and Bubbie and Zadie just after.  But Judaism uses sunset as the divider between days, which could mean that sunset was the breakpoint between the two, and perhaps the consecutive secular dates were used on the marriage returns for convenience.  I probably won't find an answer to that question, or why they were married in The Bronx, now that all four of them have passed away.

Right now I can't find the name of the rabbi who performed the marriages, but I do know that Jan Peerce, the well known Metropolitan tenor, sang two songs, because Bubbie suddenly blurted that out one day.  She couldn't remember what he sang but did recall that the cantor's son sang "Because" (maybe this one) and "Oh Promise Me."

Bubbie and Zadie were in love with each other for their entire lives.  They were always so good to each other and went everywhere together.  For each of the 50 years that they were married, Zadie gave Bubbie a big, flowery Valentine's Day card.  Bubbie used to call Zadie her "little man" because she was taller than he was.

Zadie was ill for the last years of his life but lived long enough to attend the big 50th wedding anniversary party that their three children coordinated for them.  It was held in Las Vegas, and lots of my aunts, uncles, cousins, and other relatives came.  I think Zadie really wanted to go to the anniversary and held on so he could.  He died shortly after it took place.  Bubbie missed him so much after he was gone.