On March 25, 1911, the fire at New York City's Triangle Shirtwaist Company caused the deaths of 146 workers, mostly female immigrants.  The outcry after the fire and deaths helped change labor laws in New York and across the United States.

I wrote about the Triangle Fire on its 100th anniversary and told the story of Frieda Welikowsky, a cousin of a friend of mine.  My friend had been told that Frieda had died in the fire and had asked me to research whether the claim was true as part of a larger family history project.  I was able to verify that Frieda was one of the fire's victims, although she did not die in the fire itself but from injuries caused by jumping out of the building to escape the flames.

This year, for the 110th anniversary, the lives of two survivors of the fire were highlighted and commemorated in a new podcast.  Fin Dwyer of the Irish History Podcast worked with Hope C. Tarr, a historical fiction author, to create a three-part podcast series highlighting the lives of Annie Doherty and Celia Walker, an Irish and a Polish immigrant, reespectively.

The first episode discusses the lives of the two women and why they immigrated to the United States.  The second episode covers the Triangle Fire itself and the experiences of Annie and Celia, who were trapped in the building with many other workers.  The third and final episode looks at the aftermath of the fire and the lives of Annie and Celia after the fire. 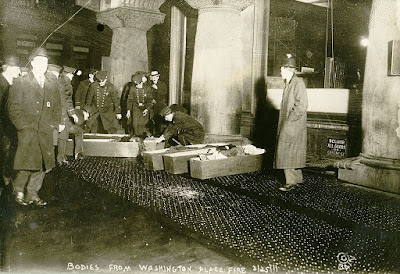