June 12 is called Loving Day in commemoration of the day in 1967 that the United States Supreme Court struck down the heinous laws against miscegenation that were in effect in yet sixteen of the states of this country, preventing people who loved each other from marrying strictly on the basis of the color of their skin not being the same.

The judge who ruled against the Lovings when they were living as a married couple in Virginia in 1958, causing them to take their case all the way to the Supreme Court, stated, "Almighty God created the races white, black, yellow, malay, and red, and he placed them on separate continents.  And but for the interference with his arrangement there would be no cause for such marriages.  The fact that he separated the races shows that he did not intend for the races to mix."

Today for Loving Day I want to honor Yang Xianyi and Gladys Margaret Taylor, who married in 1941 in China but who might not have been able to marry in some of those sixteen U.S. states.  They remained married until Gladys died in 1999. 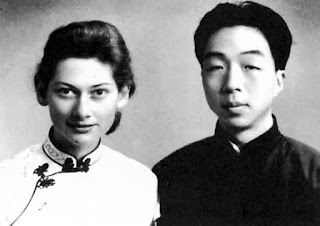