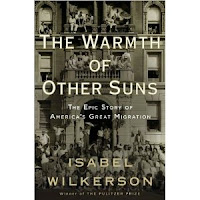 This workshop series started last September and is being held at the Oakland Regional Family History Center, where I volunteer.  We did not meet in November or December because of the holidays, so we're just starting up again for the new year.  Wednesday night we watched a Podcast of a lecture by author Isabel Wilkerson, who talked about her book The Warmth of Other Suns:  The Epic Story of America's Great Migration.  The book discusses the three primary routes that blacks used to leave the South between about 1915-1970, to the Northwest, Midwest, and West.

I'm attending this workshop not only to increase my knowledge in general and to be able to help more patrons at the Family History Center, but also because I am researching the family of my aunt's sister's late husband, who was black.  As I've mentioned before, I have a very extended family.  My aunt, to whom I'm very close, is married to my mother's brother.  I've been working on her family history for close to ten years and sharing the information with her sisters, whom I also know.  Several years ago, her oldest sister asked if I would be willing to research her late husband's family.  Theirs was an interracial marriage that was able to happen only after the Supreme Court struck down state laws against miscegenation, thanks to the Lovings.  (You can read about the story of the Lovings at http://lovingday.org/the-loving-story.)  That's when I started learning some of the intricacies of researching black genealogy, but I still have a lot to learn.

So far I've traced two of his families back to 1870, but I have not been able to get past that yet.  Just recently I found an entry in an online index for the marriage of his great-grandparents in 1878, so I'm hoping that will take me back a little farther.

While listening to the Podcast I thought about him in context of the information.  He apparently followed the Midwest migration route, going from Georgia to Ohio, while it appears the rest of his family stayed in Georgia.  He and the millions of black Americans like him took a brave leap, leaving behind the segregation of the "emancipated" South.
Posted by Janice M. Sellers at 8:57 AM