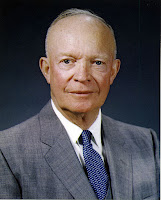 After the end of World War II, General Dwight D. Eisenhower spoke at the New York Metropolitan Museum of Art on the importance of safeguarding cultural and historical objects, and how he instructed his troops to preserve items even while fighting the war.  An original recording of his speech was discovered in the museum's archives and has been converted to a digital format.  An AP article about the speech and the recording is available on Yahoo! News.  Eisenhower gave the speech after the museum honored him with a life fellowship.
Posted by Janice M. Sellers at 2:09 PM