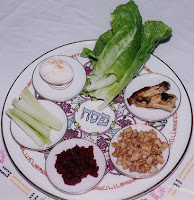 As we near the end of Passover, I have been thinking about what Passover means to me.  I am not a practicing Jew, and I did not grow up with Jewish religion as a part of my life.  But I have been hosting a seder dinner for about 15 years now.

My mother was Jewish, but she was not observant.  She married a Catholic (my father) and then a Protestant (my stepfather).  I never saw her anywhere near a synagogue, but I went to Midnight Mass with her more than once.  We had a menorah in the house for Chanukah, but we always had a Christmas tree (which my mother sometimes jokingly called the "Chanukah bush").  We had ham for Christmas and Easter, because my mother's best friend loved ham.  And I knew from the time I was a little girl that when my mother died, she wanted to be cremated.  A lot of things that don't make you think "Jewish!"

But my mother was very close to her family, and we saw my grandparents several times a year.  My grandmother regularly sent cards for Rosh Hashanah, Chanukah, and Passover.  We were kept up-to-date with what other family members were doing, including marriages and bar mitzvahs.  I heard lots of family stories and always knew what our family name was originally.  My mother and her parents sprinkled their conversations with a fair amount of Yiddish.  I sound a lot like my mother when I speak, and people who meet me often think I am from Brooklyn, even though I was born in East Los Angeles.  I grew up feeling Jewish culturally but with no connection to the religion.

Several years after my mother passed away, I was very surprised to find out from my grandmother that my mother grew up in a kosher household.  My grandfather came from a very conservative Orthodox family, and my grandmother wanted her father-in-law to feel comfortable eating in her home.  So she kept kosher until he died.  She had four sets of dishes -- meat and dairy for Passover, and meat and dairy for the rest of the year.

My seders started in an unusual way.  One year my friend Anne and I were invited to seder at a mutual friend's house.  (Anne converted to Judaism for her first marriage and raised her children Jewish.)  We really enjoyed the seder, but by the next year the situation with the other friend had changed, and we were not as close anymore.  So Anne and I decided to hold a seder ourselves.  And now we have a tradition.

The dishes I use at our seders were my grandmother's Passover dairy dishes.  The silverware was my great-grandmother's.  We use a traditional haggadah.  These give me a sense of connection not only to my own family history but to being Jewish.
Posted by Janice M. Sellers at 9:09 AM