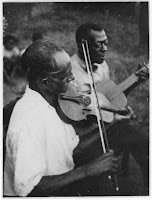 Do you have family heirlooms of the audible variety?  That would be some kind of audio recording, such as of a family event, an oral history interview of a grandparent, or maybe a singing performance by your brother.  As with photographs, these are unique items that should be identified and saved to share with future generations.

It used to be that cassette tapes were often the way these were shared.  I have two cassettes of my aunt's uncles and aunt discussing family history and other relatives.  I even have a cassette with recordings of several of my voice recitals.  Nowadays, however, the most common way to share audio is by electronic files.  If you have old recordings, you should probably consider transferring them to a digital format and then sharing them on CD's or DVD's with family members.  Recently the New York Times published a three-part series on archiving family history; the first part discussed preserving audio, including important things to think about when converting analog to digital.

Some audio recordings are national heirlooms.  The May–June 2013 issue of the Library of Congress Magazine included an article titled "Saving Our Sounds."  The National Recording Registry includes musical, spoken word, and natural sound recordings that span 150 years of our history.  The complete list of titles in the National Recording Registry is available online and includes such things as Dr. Martin Luther King Jr.'s "I Have a Dream" speech, Fanny Brice singing "Second Hand Rose", Scott Joplin playing ragtime, and Ishi, the last speaker of the Yahi language, singing and telling traditional stories.  Some of the recordings themselves are online also.

If you don't yet have audio heirlooms to share with family members, there are some resources to help you start.  The StoryCorps oral history project allows you to record yourself and/or a relative, gives you a copy of the recording on a DVD, and archives your recording in the Library of Congress American Folklife Center.  And this coming Wednesday, August 7, Marian Pierre-Louis will give a presentation on conducting oral history interviews and sharing them, through Legacy Family Tree Webinars.

I wish I had a recording of my father's swing band performing on Ted Mack's Amateur Hour.  But if they didn't record Gladys Knight (the winner) that night, they sure as heck didn't record my father.
Posted by Janice M. Sellers at 11:54 AM