I recently saw the documentary The Mexican Suitcase (2011), about the discovery of 4,500 photo negatives from the Spanish Civil War.  I particularly wanted to see the movie because a cousin of mine fought with the Lincoln Brigade, and I was hoping there might be something about the brigade in the movie.

The movie focuses primarily on the story of the negatives and the three photographers who took the photos.  Robert Capa, Gerda Taro, and David "Shim" Seymour — born Endre Ernő Friedmann, Gerta Pohorylle, and Dawid Szymin, Jews from Hungary, Germany, and Poland, respectively — were said to be the first photographers to work in live war zones.  Prior to this, we were told, photos were taken before battles and afterward.  These photographers changed the way people saw wars by their work.  All three died while taking photos in war zones — Taro in 1937, during the Spanish Civil War; Capa in 1954, during the First Indochina War; and Shim in 1956, while covering the armistice of the Suez War.

The negatives had been kept in Paris by Imre "Cziki" Weisz, the darkroom assistant used by the three photographers to develop their film.  He was also Jewish.  Sometime around 1940 he became concerned about his survival in Europe.  He managed to deliver the negatives, which he had carefully catalogued and stored in handmade boxes (the "suitcase" of the movie title), to Francisco Aguilar González, a representative of Mexico to the Vichy government in France.  Aguilar apparently took the negatives with him when he returned to Mexico, because in 2004 his daughter gave them to filmmaker Ben Tarver in Mexico.  Eventually this led to an exhibit at the International Center of Photography in New York City and to the documentary by Trish Zeff.

Interspersed with interviews with several people about the photographers, the negatives, and the story of the negatives' survival were interviews with Spanish survivors of the Civil War and their descendants.  These interviews focused on feelings of loss, being uprooted, and having to make new lives.  The movie said that some 200,000 people fled Spain during the war.  Most of the interviewees were in Mexico; a few were in Spain.

I found some parallels between what happened to the Spaniards who supported the Republic and to Jews during World War II, though obviously not on the same scale.  For a time there was a concentration camp in Argelès in France that housed about 100,000 people who had fled Spain.  Most countries would not accept the Spaniards as refugees; this was because they recognized Franco's regime as legitimate, but Mexico and the Soviet Union (incorrectly called Russia in the film) did accept the refugees.  There are mass graves in different parts of Spain filled with bodies of those who "disappeared" during the war and later.  And most of the survivors were unwilling to talk about their experiences for decades.

One of the descendants who was interviewed was participating in an archaelogical dig at one of the mass graves in Spain.  She said she was trying to find out what happened to her grandfather, one of the many people who "disappeared."  Her story was presented in pieces throughout the movie.  It was not clear how many different skeletons they showed, but it certainly didn't appear to be more than two, making the identification of the site as a mass grave confusing.  Then, near the end of the movie, the young woman said that she was disappointed she hadn't found her grandfather at the site but that she would keep looking.  Nothing was said about how she was able to determine that none of the skeletons there was her grandfather, and since all they had shown in the movie was a few bones at the site, I don't know how any identification could have been made at all. 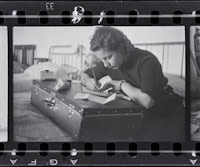 One of the most touching moments in the film was a short scene at the exhibit of the negatives at the International Center of Photography.  A woman found three photos of her grandmother sitting at a desk, writing a letter.  The family had been told about the photographs having been taken, but the woman had never seen them before.

Even though I didn't find a family connection, overall this movie was interesting, but in trying to present the two stories concurrently the narratives sometimes were difficult to follow.  You saw a snippet of one interview, then another, then another, not necessarily all talking about the same thing.  This choppy style did not lend itself well to a coherent storyline.  The photographs tell a story of their own, but most of them were not identified.  The movie is worth seeing, but you will probably want to supplement what you learn from the movie with additional research of your own to give a more complete picture of what happened.
Posted by Janice M. Sellers at 11:40 AM