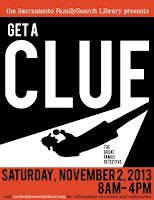 Saturday I attended the Sacramento FamilySearch Library's annual seminar, with the theme of "Get a Clue."  I think they've held them for a few years, but this is the first time I've gone.  It was a well organized day with a good selection of talks.  There were five class periods and seven classes during each period.

I was invited to give two presentations (which is the reason I went), on online newspapers and women's maiden names.  Both of my sessions were well attended, and everyone was really enthusiastic about learning new methods to find answers to their research questions.  I love seeing people get excited about family history research!

I attended talks on military records, researching collateral lines, and adoption research.  By far the standout was the session on adoption, which I thought was appropriate, since November is National Adoption Month.  The speaker, Don Mencarini, has worked in the Adoptions Support Unit of the California Department of Social Services (DSS) for more than 27 years.  He gave lots of detailed information on how the Adoptions Support Unit can help with research and also about the limitations of what they can reveal.  The unit has records going back to 1928 and handles all of them under California's closed adoption laws, even though California didn't actually seal adoption records until 1935.  Mencarini was very surprised to learn, however, that before adoption records were sealed they were indexed with other civil cases in county superior courts.  (Yeah, I'm the one who told him that.)  He also told us that DSS has a record of all adoptions in California.  I am very happy I learned about this useful resource.
Posted by Janice M. Sellers at 12:59 AM