Search for a Photo of a Bride Wearing Her Wedding Veil 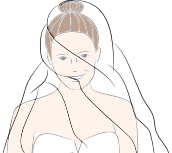 A friend of mine, Sheri Fenley, is looking for a photograph of a bride wearing her wedding veil.

While I'm sure the bride was beautiful, what's actually more important here is her veil.

The bride was Jeanette Augusta Meier.  She was the daughter of Abe Meier and Minnie Eisig, and the granddaughter of Aaron Meier and Augusta Hirsch.  Aaron Meier started the Meier & Frank stores in Portland, Oregon in 1857.  The family was Jewish and from Bavaria.  They were early pioneers of Portland and prominent socially.

Jeanette married Walter David Heller on November 14, 1922 in Portland.  He was the son of Moses Heller and Adele Walter, and the grandson of Martin Heller and Babette Kuper.  Martin Heller was a Bavarian Jew who came to San Francisco in the 1850's.  He was president of Congregation Emanuel in San Francisco from 1876 until his death in 1894.  The Heller family was also socially prominent.

The veil that Jeanette wore on her wedding day has been worn by 48 members of the family and extended family at their own weddings.  Jeanette's granddaughter is helping her mother put together a scrapbook that will stay with the wedding veil as it continues to be passed down through the generations.  They have a photograph of every single bride who wore the veil — except for Jeanette Augusta Meier Heller.

So I am helping spread the word about the search for a photo.

Since the bride was from Oregon and the groom from California, Sheri has been trying to cover both areas.  She has searched these newspaper collections online:
• Chronicling America, http://chroniclingamerica.loc.gov/
• Historic Oregon Newspapers, http://oregonnews.uoregon.edu/
• California Digital Newspaper Collection, http://cdnc.ucr.edu/cgi-bin/cdnc/
• ProQuest Historic San Francisco Chronicle online

She found several articles about the wedding, but no photos.  She has also contacted the Jewish Genealogical Society of Oregon, the Oregon Jewish Museum, and the Oregon Historical Society, and no luck there either.

The best remaining possibility would seem to be the Magnes Collection of Jewish Art and Life at the Bancroft Library on the University of California at Berkeley campus.  Among the items in the collection are a card index for the Emanu–El newspaper and the complete historical run of the paper.  I'm sure the wedding was reported in the newspaper; maybe there's a photo?  That index would be really convenient to check, but the staff at Bancroft said that, "Unfortunately the materials are as yet unprocessed and there's no way of telling whether this collection contains the photo you are looking for."  Well, the index has been catalogued and some parts of the collection have been processed; many of us have been waiting patiently for several years for the rest of the Magnes Collection to be accessioned at Bancroft, i.e., made accessible for researchers.  The Bancroft staff apparently have been busy with lots of other things and somehow just haven't gotten around to finishing this task.

There are a couple of other possibilities for the Emanu-El newspaper.  According to the Chronicling America database, both the Jewish Theological Seminary of America and the New York Public Library have the newspaper for 1922, JTS in hard copy and NYPL on microfilm.  Neither has an index, of course, but they could be searched manually.  But access is difficult for us, as Sheri and I are both in California.

And there's always a small chance that someone out there who was connected with the Heller and/or Meier families has a photo in a collection at home.  The more people who share this story, the better the odds that anyone who might have a photo hears about the search.

So here goes my shot in the dark.  Let's see where it lands.
Posted by Janice M. Sellers at 2:09 AM