She Was in the Book!

I have been interested in my family history since I was very young, because my mother and grandmother always spoke about family members.  I grew up knowing names, relationships, birthdays, and anniversaries and hearing lots of stories.  But what really got me hooked was an assignment in junior high school to fill in a family tree back four generations.

I still have that purple mimeographed tree (that special smell is long gone, though).  I also have all the notes I made when I interviewed my relatives.  I knew a fair amount about my mother's side but not as much on my father's.  To learn more, I spoke with my dad, my aunt who lived nearby, and my grandfather.

One of the facts that everyone seemed to agree on at the time was that my grandfather's paternal grandmother was Kate Moore.  Everyone told me that.  So I dutifully wrote it down (no personal computers with family tree programs back in the mid-1970's) and began my search for her.

Over many years of searching I was not able to find a Kate or Katherine/Catherine Moore who married a Sellers and had a son named Cornelius Elmer, but I kept looking.  Sometime around 2000, I found a book on eBay about the Benjamin Moore family of Burlington County, New Jersey, the county in which the family lived for many decades.  It wasn't going for much money, so I figured I'd give it a shot.

The book arrived just before Labor Day weekend.  I was going to a convention in Los Angeles for the weekend and brought the book with me for "light reading."  I checked the index and found one mention of a Sellers, but it was for a Catherine Owen Sellers marrying someone named Moore, which didn't fit what I had been told.  In addition, there was no son named Cornelius Elmer.  I read through most of the rest of the book, which seemed well put together, but it didn't appear to be my family after all.  When I packed up to return home at the end of the convention I tossed the book into the van with everything else.

A month later, I discovered that one of my grandfather's sisters was still alive (you'd think someone in my family would have already mentioned this to me, wouldn't you?).  Of course, I immediately wanted to talk with her.  My aunt gave me Aunt Betty's phone number, and I settled in on a Sunday afternoon to call her.

When Aunt Betty answered, I introduced myself and told her I was the granddaughter of Bert (her brother) and that I wanted to talk to her about family history.  She sounded suspicious but said, "Tell me what you know," in a no-nonsense tone.  I ran through a quick overview of the information I had.  She started to warm up to me, so I figured I must have been reasonably accurate.  Then I mentioned that I had been told Kate Moore was the mother of Cornelius Elmer (Aunt Betty's father).  She said, "Well, you know that Moore was her second husband."

Aunt Betty proceeded to explain that Kate's first husband, Cornelius Elmer's father, had died young and that she had married George W. Moore a few years later.  That's how she became Kate Moore.  She also told me that George and Kate had a son, Howard Evans Moore.  Cornelius Elmer had loved his stepfather so much he named one of his own sons after him:  George Moore Sellers (who later was known as Dickie).

Wow!  That was certainly going to change my research.  I thanked Aunt Betty and wrapped up our call.  I went through my notes and made sure the scribbles were legible, then called my dad.  When I told him that Aunt Betty had been very short and matter-of-fact at the beginning of the call, he said, "Yeah, that's Aunt Betty, all right."  He also was surprised to hear about Kate Moore's second marriage.

The next morning I was telling someone about my conversation with Aunt Betty when I suddenly remembered the book I had read a month previously.  I jumped up and said, "I'll be right back!"  I ran out to my van, got the book (yes, it was still in the van a month later — don't ask), and ran back inside.  Lo and behold, when I looked again at that Catherine Owen Sellers, whom did she marry?  Why, George W. Moore, that's who.  And wouldn't you know, they had a son named . . . Howard Evans Moore!  So she was in the book after all!

In 2002 I made a special trip to Florida to meet Aunt Betty in person.  We had a great time and got along beautifully.  I'm really glad I was able to go when I did, because she passed away less than two years later.  Thanks for your help, Aunt Betty!  You are still in my thoughts. 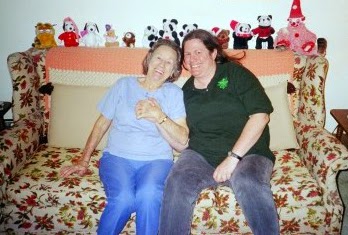