It's That Giving Time of Year: World War I and II, Missouri Death Certificates, Vishniac Photos, Kilts, and More

It seems there are always more genealogy projects and mysteries that volunteers can help with, doesn't it?  I'm posting some of these later than I planned to, but all still appear to need assistance or answers.

More large institutions are turning to crowdsourcing to make information available.  The Smithsonian opened its Transcription Center to public input this past July.  After having digitized many handwritten documents, volunteers are now sought to transcribe the often difficult-to-read writing.  As with most such projects, each document is transcribed by multiple volunteers to try to ensure the highest accuracy.

The United States Holocaust Memorial Museum is also following the trend.  The museum has worked with the International Center of Photography in New York to digitize and place online the work of photographer Roman Vishniac.  Many, probably most, of the existing captions did not name the individuals in the photos.  If you can give names to previously unidentified photos, your help is wanted.  Visit the Vishniac collection and see if there's someone you know.  If you recognize a person or a place, click the link below the photo to send a message.

Now this is a project made for family historians.  To help commemorate the centennial of World War I, the New York Times is asking people to share stories of their ancestors' roles during the war, along with the efforts made to learn about those stories.  So instead of just the bare facts, you can tell about the research you did and where you went to find out what happened to your great-grandfather.  One woman's story about her grandfather, who fought on the German side, is online.

Every January 2, under Missouri state law, the Missouri State Archives receives another year's worth of death certificates from 50 years previous.  The archives processes and scans the certificates, and then volunteers do a transcription marathon.  It takes the volunteers only about four days to transcribe and check the year's worth of certificates, around 50,000–60,000 images.  The archives usually adds the images and the transcribed entries to the death certificate database by the middle of February.

Volunteers work from the comfort of their own homes, as with the FamilySearch Indexing program.  Also similar is that each record is transcribed twice and then checked.  If they don't match, however, a third person transcribes the record.  If none of the transcriptions match at that point, a staff member reviews the certificate.  Unlike FamilySearch, this program has no software you must download, but you do need to create a free account.

Mary Stanfield is the eVolunteer Project Coordinator.  If you or your society is interested in participating this January to transcribe 1964 death certificates, or if you have any questions, contact her at archvol@sos.mo.gov.

The Jews of Frankfort DNA Project is both a regional and a surname Y-DNA project.  Male participants are sought who are Jewish; have a surname found in Frankfort/Worms in the 16th century; and have a documented lineage back to a male ancestor in the 16th century or earlier living in Frankfurt, Worms, Mainz, Alsace, Prague, Vienna, or another major Jewish center.  If you fit the criteria, the project would like you to take a Y-DNA test at Family Tree DNA and submit the results.  More information, including the known list of surnames, is available on the project Web site. 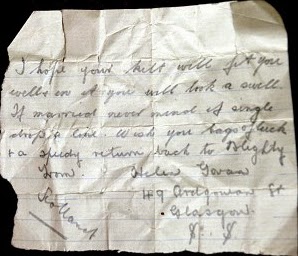 A Glasgow seamstress sewing a kilt intended to be part of a World War I uniform included a note tucked into the stitching.  It's possible that Helen Govan was looking for a future husband:  "I hope your kilt will fit you well, & in it you will look a swell. If married never mind. If single drop a line. Wish you bags of luck, & a speedy return back to Blighty Town."  Now that the note has been discovered, the family that owns the kilt is searching for descendants or other relatives of Govan to learn more about her and the reason she included the note.

A man who purchased a World War I medallion, and his father, are now trying to determine to whom the medal belonged.  They have done some research and learned that six men who served on the SS River Clyde at Gallipoli earned the Victoria Cross and this medallion, which was given by the Imperial Merchant Service Guild for bravery.  You can read the story of the men's service here.  The names of five of the men are included in the article.

An online Michigan newspaper has been searching for the 39,000 World War II veterans it estimates are still alive in Michigan at the present time.  MLive created a database to share the veterans' names, photographs, and experiences and to honor their service.  The big push was to include information by Veterans Day, but information is still being sought.  An announcement about the project is available, and the database and submission form can be found here (scroll down for the submission form). 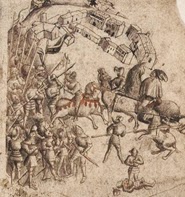 At the Battle of Bannockburn, the outnumbered forces of Robert the Bruce defeated the English army of King Edward.  The 700th anniversary of the battle has passed, but if you believe you are descended from one of the men who fought there, researchers would still like to talk to you and help you determine if your ancestor was there, using modern DNA techniques.  Stewarts and McDonalds particularly are encouraged to contact Graham Holton, who was the head of the family history project for the anniversary.
Posted by Janice M. Sellers at 2:19 AM