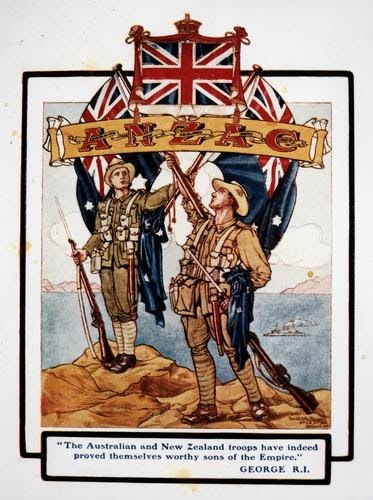 First, my apologies.  I know Anzac Day was yesterday, April 25, but I was not able to post this then.  I did want to commemorate the day, however, especially as this was the 100th anniversary.  Anzac Day is the anniversary of the first military campaign with significant casualties for Australia and New Zealand in World War I.

I lived in Australia for two years, from 1971–1973, which is when I learned about the Anzacs.  The lesson obviously made an impression, because I've never forgotten, and I remember the immense pride that was always evident when their history was discussed.

The Australia and New Zealand Army Corps is particularly remembered for fighting at the Battle of Gallipoli during World War I.  I have no Anzac veterans in my own lineage, but I share the pride and esteem that I was taught while I lived in Australia.

More information on the Anzacs can be found on several sites, including the following:

• I Love the Anzacs