Randy's challenge this week for Saturday Night Genealogy Fun was to post a favorite family photograph and tell about who is in it:

1)  Show us one of your favorite photographs of your family - a group, yourself, your mom, your dad, your sibling(s), your grandparents, etc.  Tell us about it - the date, the event, the setting, the persons in the photograph.

I'm only a few hours late!  But this was an easy choice for me, especially with the inspiration of Randy's four-generation photo. 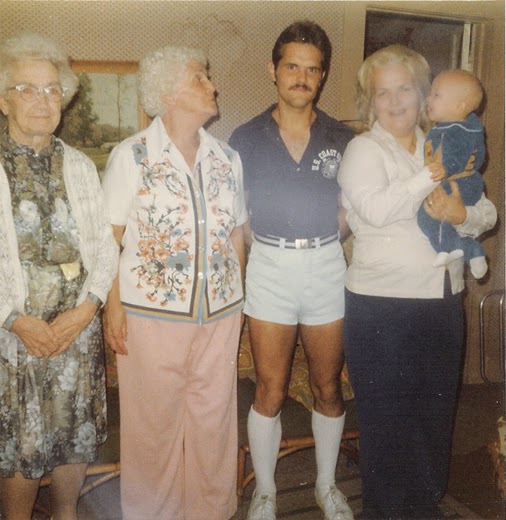 This is one of the few five-generation photos I have for my family.

Event:  Just the fact that five generations were together was probably enough, but maybe also to celebrate the new baby.

Setting:  I don't know, but probably my cousin's or my aunt's home.  (I need to ask my cousin!)

Now that I've noted all the years, I realized that this photo is even more special, because only two years later my aunt passed away, followed two years after that by my grandmother.  I'm glad they took this photo when they did!
Posted by Janice M. Sellers at 8:31 AM