This week for Saturday Night Genealogy Fun, Randy Seaver told everyone about a fun site that lets you customize maps of the U.S. and Canada based on how many times you have visited states and provinces.

1)  What states in the USA and what provinces in Canada have you visited or lived in?

2)  Either list or make a map of them (at the http://www.defocus.net/visitedstates/us-canada.html Web site) and indicate the following:
*  red for states/provinces where you've not spent much time or seen very much.*  amber for states/provinces where you've at least slept and seen some sights.*  blue for states/provinces you've spent a lot of time in or seen a fair amount of.*  green for states/provinces you've spent a great deal of time in on multiple visits.
3)  For extra credit, you could make a map to show where your ancestors resided at any time (e.g., in 1900), or perhaps where your 16 great-great-grandparents or 32 3rd-great-grandparents married, or where your ancestors were born, all with an appropriate legend.
4)  Tell us, or show us, your "Where I've been" map and any other map that you created having fun tonight.  Put them in your own blog post, on Facebook or Google+, and leave a comment on this blog post so that we all see them.

When I made the map for the states and provinces I have visited, I was a little disappointed.  I thought I was closer to having been in all 50 states, but I'm only at 43.  Obviously, I have a little work to do, even if I do have a lot of green states!  Unfortunately, I don't have any family research that I know of in any of the states I'm missing.  On the other hand, I was pleasantly surprised when I realized I have been in four Canadian provinces.  Here's how my "where I've been" map turned out: 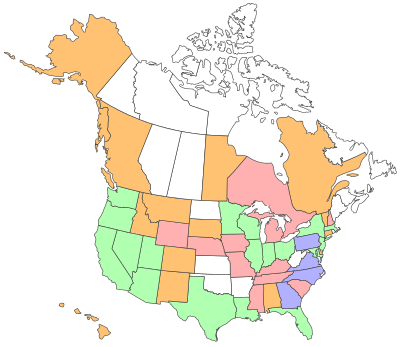 I have lived in California, Florida, and Nevada.  I have visited all the other green states multiple times.  The red states are generally places I either drove straight through or landed in an airport for a layover.  For New Hampshire and South Carolina, however, I deliberately went over the state border (from Vermont and Georgia, respectively) specifically so I could say I had been in the state.  Both times I did a little dance (not the genealogy happy dance, though!).

It turns out that I didn't need to be that detailed.  In 1865 all of my ancestors save one were in New Jersey or Pennsylvania.  The one ancestor who wasn't, my great-great-grandfather Cornelius Godshalk Sellers, was somewhere near Washington, D.C., which doesn't even appear on the map!  I put a marker for him in Virginia, guessing that was probably the side of DC he was on. 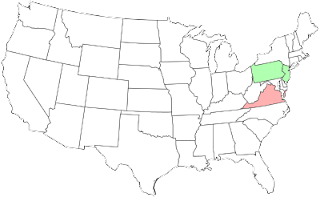 If I did a map of where my U.S. great-great-grandparents or 3rd-great-grandparents were married, or where they were born, it would probably look pretty similar to this one, with almost everyone (if not everyone) in New Jersey and Pennsylvania.  If I added births of more recent ancestors, I would at least be able to include a few in New York.

I did notice on the description page of the map site that the Canada map was added to the original U.S. map because someone else created it.  Maybe someone will create a Europe map??
Posted by Janice M. Sellers at 2:26 AM