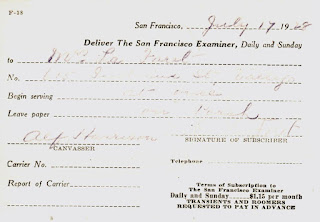 This is a 5 1/2" x 4" piece of whitish paper.  It may have been white at one time and colored with age.  It is a carbon copy of a newspaper subscription order from 1928, with the specifics of the order being handwritten.  The carbon of the handwriting, being blue, did not scan well, particularly in the middle.  As with previous documents that I have transcribed, I have underlined the handwritten parts.

In July of 1928 Emma decided to begin a subscription to the San Francisco Examiner.  Since the person who apparently signed her up was listed as a "canvasser", he might have been going door to door.  Maybe he was a good salesman.   Emma was still living at 615 Indiana Street in Vallejo.  This is the only time I've seen her signature with only an initial for her first name.  No phone number was listed; she might not have had one.

Considering the other documents which Emma saved, it was interesting but confusing to find a receipt for a newspaper subscription.  Why was this considered important enough to keep?  I can't think of a logical reason why this has survived all these years.  Whatever the reason, it is the last document of Emma's in the treasure chest I received.  Next week I'll begin examining the documents pertaining to Jean La Forêt!

As an amusing side note, most of the time, when people compare prices from yesteryear to those of today, current prices are much higher.  In this instance, it's the other way around.  After a lot of dramatic back and forth between the San Francisco Examiner and San Francisco Chronicle several years ago, the Examiner became a free newspaper you could pick up all over the city.  From the newspaper's Web site it appears there is still some sort of subscription option, but I couldn't find a price.
Posted by Janice M. Sellers at 10:14 PM