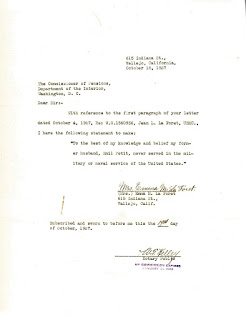 This week's document is typed and stamped clearly and legibly with almost no handwriting, as were last week's, so I'm opting not to transcribe it either.  It is a letter typed on 8 1/2" x 11" white watermarked ("–OYALTY BOND") bond paper.  It has two holes punched in the top, probably to put in a file folder with those metal holders that I don't know the name for.  It has two folds, as though it had been placed in a mailing envelope.  On the back is a line of rust about an inch long that looks very similar to the one on the letter dated May 17, 1927 from the Bureau of Pensions (the line shows through the paper from the front and can be seen in the scanned image above).  This letter may have been clipped with that letter at some point, though it was not when I received it.

In last week's post about "The Perils of Emma" I described the carbon copies of documents, dated July 27, 1927, that Emma La Forêt sent to the Pension Bureau in response to the letter from the Bureau, dated May 17, 1927 (the one with the rust mark), asking her to supply various forms of proof of her eligibility for the pension she was applying for.  Those documents covered almost all of the points in the May 17th letter.  The one item Emma had left unanswered was #4, a statement from her as to whether any former husband of hers had served in the U.S. Army or Navy.

I guess the Bureau of Pensions did send her a letter or postcard asking where that information was (though I don't have it), because that's what this letter is about.  She said that good old Emil (sic) Petit never served in the U.S. military or naval service (what, the Navy isn't military??!).

Unlike two of last week's documents, this letter does include the case number.  Emma again complied with the requirement that the information be a sworn statement, and again the witness was notary public W. T. Kelley, whose signature and impressed seal are on the letter.  So Emma had now supplied all the information requested by the Bureau of Pensions.

Something interesting about this letter is that it appears to be an original, not a carbon copy like last week's.  The words look like typing ink, not carbon, and some punctuation marks can be physically felt on the back.  It has Kelley's impressed seal.  Kelley's and Emma's signatures and the date ("19th") appear to be pen ink, not carbon.  Below Kelley's signature is his notary commission expiration date stamped in purple ink.  The fact that it looks like an original, coupled with the holes punched in the top suggesting it was in a file, make me think that this was sent back to Emma from the Bureau of Pensions.  I don't know why they would do that, though.
Posted by Janice M. Sellers at 10:06 PM