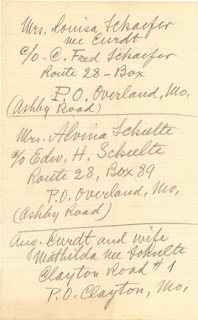 This week's document is one small piece of lined paper, 4 15/16" x 7 15/16".  It's yellowish-green with no watermark.  It reminds me of the pages you see in a stenographer's notebook, but there are no perforations indicating it was torn from a book.  The writing is in pencil in a strong hand.  I'm pretty sure it's Jean La Forêt's handwriting.  It is undated.

Maybe Jean made this list to keep it handy while he and Emma were living in Missouri.  I wonder why it's on this paper and not one of the pages in his journal.

It's nice to have the siblings' names with those of their spouses.  Emma didn't include the spouses' names in her writings.

Louisa and Alvina appear to have lived down the street from each other, although Louisa's box number was left out.  We learned from Jean's list of dates that he went to Overland in 1918 (although Emma said in her handwritten narrative that he came in 1919), so he and Emma were apparently living close by.

In my comments on the second part of Emma's narrative, I mentioned that some surnames kept popping up.  From this list of addresses, we can add another Schulte to the family.  So Emma's oldest daughter, one of her sisters, and her brother married Schultes.  This is sounding even more like an insular community.  Or maybe they were all part of the conspiracy?
Posted by Janice M. Sellers at 11:00 PM