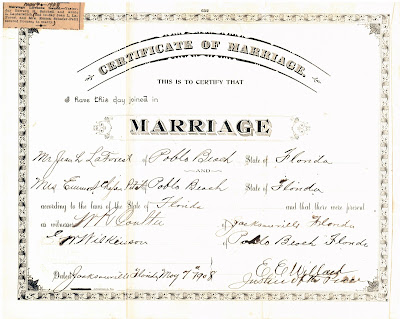 Now that I've finished up with Jean La Forêt's journal, I'm back to regular documents, and the first one is Jean and Emma's actual marriage certificate from 1908!  And I thought I was going to need to order it from Duval County.  (I may still try to get a copy of the marriage license application, if it still exists.)  Please forgive the imperfect image; I had to scan it in two parts, and my tiling was inexact.  But you can pretty much see everything.

This piece of paper is 12" x 9 3/8" and yellowish; it might have originally been white.  It's about a 20# bond weight.  There is a watermark, though I can't tell exactly what it is; it seems to be an image of a person, apparently a man, because he's wearing pants.  The head is cut off.  This was a blank form that was filled in after the marriage was performed.  The Justice of the Peace's seal is impressed in the lower left corner.  In the upper left corner, a newspaper clipping was pasted onto the certificate.

The paper was folded twice as though to fit in an envelope.  In addition, the far right side was folded over about a quarter of an inch, which I did not notice until now, so it was scanned with that fold.


THIS IS TO CERTIFY THAT

I have this day joined in

What struck me immediately as I began to transcribe this was the spelling of Jean's last name.  Both on the certificate and in the newspaper announcement of the marriage license it is spelled LaForest.  Now the name as it appears on the photograph from Pablo Beach makes more sense.  But I wonder why Jean's name was spelled this way in Florida.

The next thing that jumped out at me was "Poblo" Beach.  Judging by the same photograph, that wasn't the way everyone spelled it.  Maybe it was an idiosyncracy of Justice Willard.

I wonder what was blacked out in the lower left, before the words "Jacksonville, Fla."  When I look at it under a bright light, it seems to be three words covered by felt marker (or whatever the equivalent writing implement was in 1908).  I think I can make out "Co." at the end, so maybe it was simply the company that printed the forms.  But why black it out?

Jean and Emma got their marriage license and married the same day.  I thought it was a sweet touch that someone marked Jean and Emma's listing with parentheses on the newspaper clipping.  I've never seen a license announcement glued to a marriage certificate before.

It was entertaining to compare the actual marriage certificate with the transcription that Emma submitted with her application for a pension based on Jean's military service.  Not counting discrepancies with punctuation (of which there were several), I found six differences between the original and the transcription:  LaForet instead of LaForest; Pablo instead of Poblo (three times); the second witness was listed as Wilkerson, but it's actually Wilkinson; and 7 instead of 7th in the date.  That's significantly worse than the differences in transcription of Emma's divorce decree.  So much for the "true and correct copy" certified by notary W. T. Kelley!

The marriage certificate was in this envelope when I received it.  I'm not sure whose writing this is, but it's likely either Jean's or Emma's.  I like the little doodle at the bottom of the back side of the envelope.
Posted by Janice M. Sellers at 10:48 PM