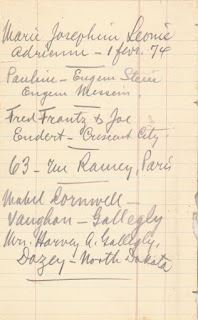 We've reached the end of the pages in Jean La Forêt's journal that have entries on them.  These pages seem to be notes rather than something organized.  Maybe these were just pieces of information Jean wanted to remember and keep track of.  None of this writing requires translation. 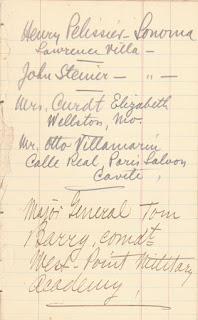 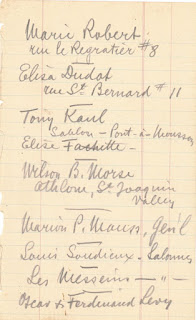 As with the list of birthdays last week, some of these are names we've seen before, but most are totally new.  Adrienne's full name is very pretty.  About halfway down the list is Emma's mother, Elizabeth Curdt, in Wellston, Missouri.  And near the end of the list is Wilson B. Morse.  He's the man Jean visited May 14 to June 14, 1890.

Jean had a Pauline in his birthday list, but her last name was Cohen.  Maybe Pauline Cohen married Eugen Stein?  But is Eugen Stein the same man as Eugen Messein?

Some names appear to be people Jean met on his travels bu didn't mention previously.  We know he was in Crescent City and Cavite.  Considering the problems he had in Crescent City, I'm surprised he cared to remember anyone there.

The Paris address might have been Adrienne's, since the photograph of her has Paris written on it.  With no context for the other names, I have no idea who they were.  I'm sure many cities have a rue St Bernard, but maybe not as many have a rue le Regratier.  Jean has left me another mystery to work on.
Posted by Janice M. Sellers at 7:34 PM