Days 1 and 2 of the FGS Conference

I've had full days of learning here at the FGS conference, attending sessions in every time slot.  Even as a kid I loved school, so I guess it's no surprise that I enjoy coming to conferences like this and adding to my genealogy knowledge.

Thursday morning started with the exhibitor hall opening at 10:00 a.m., ahead of the first presentations.  I merrily zoomed around and collected free journals, books, and chocolate from vendors.  In fact, I gathered so many goodies that I had to go back to the car to drop everything off, so I wouldn't strain my back with all that weight!

As for the educational aspect, session topics included an overview of Indiana genealogy (types of records available, when they began, where to find them), letters and claims from emancipated slaves and how helpful they can be when searching for family information, updates from the Records Preservation and Access Committee (have you signed up for the announcement lists yet?), and a workshop on reuniting Jewish Holocaust survivors and the availability of Jewish resources on the Internet (offered in part to help publicize the new Northeast Indiana Jewish Genealogical Society).  The most informative talk I attended was on researching U.S. and Canadian World War I veterans, given by David Allen Lambert of NEHGS.  He discussed several record types that were new to me and gave me new ideas on ways to research the World War I vets in my family.

I think I learned from more of the sessions I went to on Friday.  I began the day with civil registration in Poland.  Although I've definitely attended other talks dealing with the subject, Daniel Jones' explanation of the timelines, jurisdictions, and changes were a little clearer to me.  Legal Genealogist Judy Russell spoke on early Indiana laws and included some general points I don't recall having heard before:  session laws versus compilations/codes, public versus private laws, and additional broad categories to search (legislative records, petitions, committee reports, minutes, debate transcripts, judicial records, circuit/supreme/appelate court records, and territorial/statehood executive/gubernatorial records).  Plus she told us how to find the advanced search page for Google Books, which they apparently have tried hard to bury (and she suggested we all bookmark it)!

Next up was Tony Burroughs' discussion of black employment after the Civil War.    This is a subject I've not seen enough coverage of, so it was all welcome information.  He talked quite a bit about farmers, tenant farmers, and sharecroppers (and the differences between them), which is what most of my family research involves.  And as is usual with his talks, he included a great list of references for further study.  The last session of my day was by Ari Wilkins, on the subject of Quakers (the Society of Friends) and black Americans, particularly before and leading up to the Civil War.  This is a fascinating history, and it was easy to see how some of the Friends' work in freeing slaves (purchasing them and then transferring them to free states, where they were manumitted) laid the groundwork for what became the Underground Railroad, with which the Friends were also involved.

Friday ended with a great event sponsored by MyHeritage.  They booked some time at Crazy Pinz, a local bowling alley/entertainment center, for their employees and some MyHeritage Friends who responded to an invitation.  We were treated to a "luau buffet" (pulled pork sandwiches, fried rice, macaroni salad, etc.) and four bowling lanes in a private area.  Several of us hadn't bowled in many, many years (um, at least 40 for me), but it was a really fun time.  We all got custom-enbroidered bowling shirts, plus we learned that Daniel Horowitz is a pretty good bowler.  I even managed to bowl one strike in my second game! 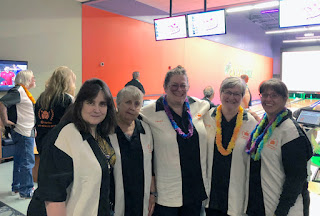 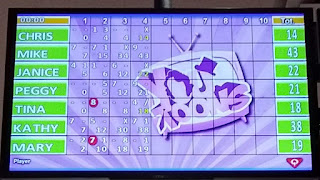