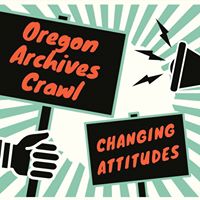 While I was living in California, I wrote about the Sacramento Archives Crawl (this year taking place tomorrow, October 6, from 10:00 a.m. to 4:00 p.m.), part of the outreach during Archives Month.  The point of Archives Month is to make more people aware of archives and the great information you can find in them, and to encourage everyone to preserve their own records.

Well, after I moved to Oregon, it sure wasn't going to be practical to fly back to Sacramento just for that Archives Crawl.  But now I've learned about the Oregon Archives Crawl!  (There was no crawl in 2017, so that's why I didn't hear about it last year.  But Oregon appears to have been celebrating Archives Month since 2008.)

It seems to be set up similarly to the one in Sacramento, with a few facilities hosting tables for many archives and records repositories.  This year's event is being held on Saturday, October 20, from 11:00 a.m. to 3:00 p.m. (a couple of hours shorter than the event in Sacramento).  The host institutions are the City of Portland Archives and Records Center, the Oregon Historical Society, and the central branch of the Multnomah County Library.  You can start crawling from any of the hosts and then progress to the others.

This year's theme is "Changing Attitudes."  Thirty-two groups are participating, including some from Washington State.

The Crawl also has a Facebook page, where it has been featuring posts about several of the groups that will have tables.

So I'm looking forward to visiting the different locations, talking with lots of archivists, and learning about what's available.  Anyone want to come out and "crawl" with me?
Posted by Janice M. Sellers at 11:22 PM