"The Masked Singer" Brings Memories of My Mother 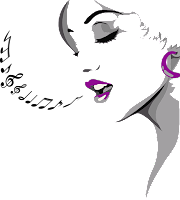 On the Hebrew calendar, today (January 27, 2020) is 1 Shevat (in the year 5780), my mother's yahrzeit, commemorating the date of her death.  It's the day I've chosen to share stories about her on my blog.  On the Christian calendar she died January 2, 1995.  Because the Hebrew calendar is a combination solar-lunar one, its dates change in relationship to the solar Christian calendar, and the dates don't match up the same year to year.

I thought about my mother a lot while I was watching the last few episodes of the recent season of The Masked Singer.  I heard about the show when it premiered but hadn't bothered to watch it, because it looked too oriented to the competition, which is a trend I have not enjoyed in a lot of current programming.

On November 13, however, Week 6 of the second season, I somehow ended up in front of the television watching the new episode.  I had to play a little bit of catch-up, figuring out what the format was and trying to understand the altered voices of the singers (extremely difficult!) as they talked about themselves and parceled out clues to their identities.  But I realized that not only was this an interesting program, it's something my mother would have enjoyed, and it's something I could see myself watching with her, or at least talking with her about it.

My mother is the person who got me hooked on recognizing voices, both of actors and singers.  She could recognize so many voices and accents, and I'm nowhere near as good as she was.  (I still haven't figured out what a Chicago accent is, but she knew one right away.)  I think she would have been really good at picking through the clues and recognizing the singing voices of the celebrity contestants, particularly those with longer careers.

I have to admit, I did much better with the people from my and my mother's generations.  I figured out Patti LaBelle and Seal and was most of the way there with Michelle Williams.  And I did guess Wayne Brady correctly.  (And I still can't understand why everyone was so surprised to learn he's a great singer; apparently none of those people remember the awesome extemp songs he did regularly on Whose Line Is It Anyway?, with or without Brad Sherwood.  I think he's brilliant!)  I haven't heard of the others who were still competing by the time I began watching, so I don't feel bad about not figuring them out (I was particularly impressed with Ken Jeong's amazing correct ID of Victor Oladipo, though!).

I don't know if my mother would have followed newer singers and actors to be able to recognize their voices.  But I think she would have had a lot of fun trying.
Posted by Janice M. Sellers at 4:28 PM