Wonder of Wonders, Miracle of Miracles: A DNA Match on My Jewish Side Whom I Didn't Already Know! 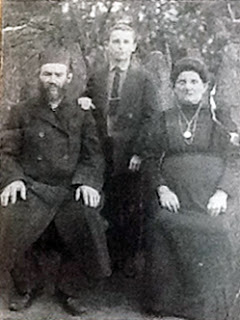 A couple of months ago I logged into my Ancestry.com account to check out my DNA matches.  I don't do this often (probably not as often as I should), mostly because I've gotten used to finding no useful information.  The close matches are all relatives I know already, the distant matches are too far away to be viable at the moment, and most of the in-between matches are on my Jewish side, which means they are actually distant anyway.

This time I saw a person estimated to be a 1st–2nd cousin.  The last name was Novick, a known Americanized version of Nowicki/Novitsky, one of my Jewish family names.  I think a 1st–2nd cousin match is the closest I've ever had on my Jewish side for someone I didn't already know, so it definitely got my attention.  I sent a message with some basic information about the family including the name of my great-great-grandfather Gershon Itzhak Nowicki and hoped for the best.

He actually responded!  And we are related!  In a definable, trackable way!

My great-great-grandfather was his grandfather.  What AncestryDNA had estimated as a 1st–2nd cousin relationship is actually 1st cousin twice removed.

His branch of the family is one for which I had almost no information.  I had his father's name with approximate birth and death years and the name of one child, whom I have learned is the oldest in the family (and she's 98 and still alive!).

We batted e-mail messages back and forth with names and dates and other tidbits about family members.  Then out of the blue my phone rang.  He had found my phone number and decided to call!  So then we spent a couple of hours on the phone talking more about family. 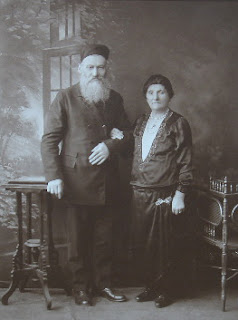 where they look quite a bit older.  I had not considered where this photo had been taken, but now I'm thinking it might have been in the United States.  If that's the case, I can bracket it between 1922, when Gershon and Dube arrived in New York, and 1936, when Dube died in Brooklyn.

And now I want to meet my newfound cousin in person.  I would have loved to try to travel over the holidays, but who wants to visit Long Island in the winter?
Posted by Janice M. Sellers at 12:25 AM