Today is the 102nd anniversary of the birth of my maternal grandfather.  Abraham Meckler (or possibly just Abe) was born in Brooklyn, Kings County, New York to Morris (sometimes Max) Meckler (later Mackler) and Minnie (originally Mushe) Zelda Nowicki.  I don't know the specific location because the lovely City of New York won't release birth records after 1909, even though it has been more than 100 years.  I read a statement once where someone from the city declared that as far as they were concerned, these are not public records in any way.


From what I was told, Zadie (Yiddish for "grandfather") grew up in a very conservative, traditional Orthodox family.  The two photos I have of his grandparents bear that out, but the one photo I have of his father shows a man with short hair and no head covering.  I don't know if that photo was taken in Europe or in the United States, so maybe the photo was taken here and he became less observant once he immigrated.

I do not have nearly the number of photos of my grandfather that I do of my grandmother.  The earliest one is from his bar mitzvah, which presumably took place in 1925, when he turned 13. 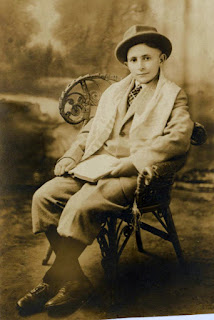 Later in life Zadie had heart problems.  He contracted leukemia from a blood tranfusion he received after a heart attack.  His health slowly worsened, but he held on until he and my grandmother had celebrated their 50th wedding anniversary, with a big family reunion in Las Vegas, where Bubbie and Zadie had lived for many years.  He passed away about a month later.
Posted by Janice M. Sellers at 11:41 PM