Saturday Night Genealogy Fun: Where Were Your Ancestors 80 Years Ago?

It's time to look at the 1940 census for Saturday Night Genealogy Fun with Randy Seaver!

(2) List them, their family members, their birth years, and their residence locations (as close as possible).  Do you have photographs of their residences from about that time, and do the residences still exist?
(3) Tell us all about it in your own blog post, in a comment to this post, or in a Facebook Status post.

I actually had several ancestors alive in 1940 (not "direct ancestors", because that's a nonsense term; someone is either an ancestor or a collateral relative).

• My father, Bertram Lynn Sellers, Jr. (born 1935), and my paternal grandparents, Bertram Lynn Sellers, Sr. (born 1903) and Anna Gauntt (born 1893), were living either in New Jersey or in NewYork.  I have looked up, down, and sideways for them in the 1940 census and have not found them.  At this point I don't expect to, because when my grandfather compiled a list of all the places he had lived during his life, he included three(!) locations for 1940.  I'm pretty sure they simply were missed by census takers.

• My paternal grandfather's mother, my great-grandmother Laura May (Armstrong) Sellers Ireland (later called Nanny Ireland; born 1882), was also not enumerated in the 1940 census.  I know the address at which she was living on Broad Street in Mount Holly, Burlington County, New Jersey, but that house number was missed by the census taker.  It does not appear in the enumeration district.  I have a photo of the house, though, which was owned by family members for at least 40 years. 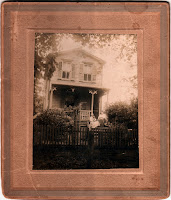 • My paternal grandmother's parents, my great-grandparents Thomas Kirkland Gauntt (born 1870) and Jane (Dunstan) Gauntt (born 1872), were living at 119 Hume Street, Mount Holly Township, Burlington County, New Jersey.  I not only don't have a photo of the house, I can't find the address on Google Maps, so the street name might have changed.

• My maternal grandparents, Abraham Meckler (born 1912) and Lillian Esther (Gordon) Meckler (born 1919), were living at 484 Livonia Avenue, Brooklyn, Kings County, New York.  My mother was there also, in a way, because my grandmother was pregnant with her when the census was taken.  I don't have a photo of the building from that time, and a quick peek at Google Maps shows a pretty modern-looking building, but I might be able to get a photo by paying New York City.

• My maternal grandfather's father, my great-grandfather Morris Meckler (born about 1862), should be in Brooklyn, but I haven't found him yet.  I really want to find him in 1940 because I have been told that he married a second time after my great-grandmother Minnie Zelda (Nowicki) Meckler died in 1936.  If he actually did, that second wife might be enumerated with him.  I know he was alive in 1940 because he didn't die until 1953.

• I might have found Minnie's father, my great-great-grandfather Gershon Itzhak Novitsky (born about 1858), also in Brooklyn, at 99 44th Street.  I think it's him, even though the person is enumerated as Jean, not Gershon, because the age and birth location are right, and he is enumerated with a wife named Ethel.  If this is the correct couple, that Ethel is Ethel (Nowicki) Perlman (botn about 1868), who was Gershon's niece.  I was told many years ago that Gershon had married his niece later in life.  Apparently, it was not uncommon in some Jewish communities for an older man who was widowed to marry a niece.  This wasn't necessarily a fully "active" (ahem!) marriage; the reason for it was for the elderly widower to have someone to take care of him.  I have a second one of these uncle/niece marriages in my family.  I don't have a photo of this residence, and Google Maps shows me a modern concrete building, so that ain't it.  This is another location that I might be able to obtain a photo through New York City.

• My maternal grandmother's parents, my great-grandparents Joe Gordon (born about 1892) and Sarah Libby (Brainin) Gordon (born about 1885), were living at 10 Livonia Avenue, Brooklyn, Kings County, New York, just a few blocks from my grandparents.  Also living with them was their oldest child, Sidney Gordon (born 1915).  I don't have a photo, and when I look for that addresss on Google Maps, I can't even tell what the building looks like, because it's covered with scaffolding.  Yet another location that I might be able to get a photo from New York City.

So I have a total of twelve ancestors who were alive in 1940, seven of whom I have found in the 1940 census.  Four of the remaining ancestors I have conceded that I will never find.  The only one left after that is Morris Meckler; I haven't given up on finding him — someday.