What are the important milestones to note this year?  What events happened in my family 50, 75, or 100 years ago (that I have dates for)?  This year's most important events from my family tree program are from both my father and mother's sides of the family, the Sellerses, and my aunt's family.

On February 12, 1771, in Godalming, Surrey, England, my Aunt Mary's 4th-great-grandparents, George Heath and Martha Stu(a)rt, were married.  That's as far back as I got on my aunt's Heath line several years ago, well before FindMyPast started digitizing and posting all those lovely parish records.  I should get back to work with the Heaths to see how much more information I can find about them, and maybe even take the line a little bit further back in time.

On January 18, 1821, my 5th-great-grandfather Moses Mulliner died in Tuckerton, Burlington County, New Jersey.  Moses is the first Revolutionary War ancestor I learned I had.  Even though he was about 35 years old during the war, he was a drummer, which has engendered some discussion with others about his background.  One of these days I really need to get around to applying to DAR, if nothing else to make my registrar friends happy.

My paternal grandmother's mother, Jane Dunstan, was born on April 28, 1871 in Manchester, Lancashire, England.  She immigrated to the United States in 1890 and married almost right away, immediately becoming an American citizen by virtue of marrying a citizen.  My father remembered his grandmother well, particularly her English accent.

The second event from my aunt's family is another wedding, this one for her paternal great-grandparents Isaac/Isidore Krebs and Frederika Weiss, who were married on August 16, 1871 in Peiskretscham, Obersilesia, Prussia.  Ruger Lustig helped me find dozens of records on this branch of my aunt's family; I lucked out because the family was in Gleiwitz, and Roger happens to specialize in that area and has thousands of transcribed records available to search.

The last child Laura May (Armstrong) Sellers, my paternal grandfather's mother, had, Bertolet Grace Sellers, was born March 6, 1921 in Mt. Holly, Burlington County, New Jersey.  This was the daughter born three years after her husband had died.  Imagine the scandal in 1921!  I had my sister track down Bertolet's birth and death certificates because we were hoping they would include her father's name, going on the possibility that her father might be the same man as our grandfather's biological father.  (Depending on who her father was, she was my paternal grandfather's half-sister or possibly full sister.)  No such luck!  Our great-grandmother declined to list Bertolet's father on both the birth and the death certificates. 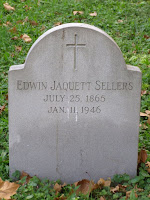 Although I don't write much about the Sellerses anymore, I feel an obligation to include Edwin Jaquett Sellers, who died January 11, 1946, probably in Philadelphia, where he lived most of his life.  He did have a short period when he lived in California, but he returned to the East Coast after that.  The reason I decided I should write about him is because he was also a genealogist, as a hobbyist.  He published about a dozen books on different lines of his family, including two for the Sellerses.  The first came in 1903 in a private printing of 150 copies; the second was in 1925 as an update to the original, with another 150 copies.  Yes, I have one of each, plus I found a second copy of the 1903 version for my brother.

I have to admit, I was really surprised when this one came up.  My first cousin Andy Meckler will turn 50 this April.  I have several first cousins, but Andy and his younger brother were probably the two my siblings and I saw the most growing up, so I really know him.  And I just can't imagine that he'll be turning 50!  I doubt I'll get to visit him in California, so I'll have to think of something special to do.