I haven't posted much recently, but I couldn't miss doing something for my grandmother's birthday today.  And what do you know — tonight's Saturday Night Genealogy Fun post from Randy Seaver fits the situation perfectly!

1.  Check out Lisa Alzo's "Fearless Females 2021" blog post prompts and write about one of them.

What a great coincidence!  Today, March 6, is my maternal grandmother's birthday!  So I noticed the prompt for March 6 which Randy had used and thought it would be perfect.

"Describe an heirloom you may have inherited from a female ancestor (wedding ring or other jewelry, china, clothing, etc.).  If you don’t have any, then write about a specific object you remember from your mother, grandmother, or aunt (scarf, hat, cooking utensil, furniture, etc.)."

Something my grandmother gave me before she passed away was a set of china.  She told me she had used it as her Passover dairy dishes when she kept a kosher household.  The amazing thing is that she acquired it one piece at a time from a grocery store during its weekly dishware sale, or at least that's what she told me.

For those not familiar with this practice, many grocery stores would sell a specific piece of china from a set for a very low price, or sometimes free, every week.  If I remember correctly, you had to spend a minimum amount in purchases at the store to get the china on the special deal.  If you worked at it, you could biuld up a nice set.

That's a lot of trips to the grocery store.  I think Bubbie was an overachiever.

The set is "Golden Wheat" (by Homer Laughlin, according to Replacements, Ltd.).  The back of some of the dishes (not all of them) says, "Golden Wheat / Made in USA / — 22K Gold — / Oven Proof."  The 22K gold was used on the wheat design on the obverse, on the rim, and for the lettering and design on the reverse. 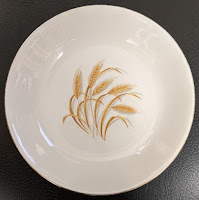 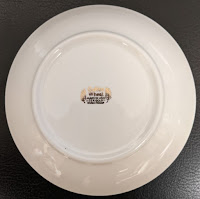 I have to admit that I am amused by the fact that the dishes are safe to put in the oven but not the microwave (because the 22K gold will set off the micro).

I still remember picking up the set from Bubbie.  I lived in California; she lived in Florida.  One day, out of the blue, she decided it was very urgent that I should come visit because she wanted to give this set to me and have me take it home.

The first problem was that she insisted on this right when I was planning my foot surgery.  No, she didn't care that I wasn't going to be fully mobile.  It had to be that month, December 1997.  Sure, I just had foot surgery and I had to be pushed around the airport in a wheelchair, but I could figure out a way to handle this, right?  But it was my Bubbie, so I went.

The second problem, which I didn't find out until I got there, was that she didn't give me an accurate idea of just how much she wanted me to take home.  This was a lot of china, even if I hadn't been working with only one good foot.

Somehow we managed to pack everything into one duffel bag, with a reasonable amount of padding to protect the pieces.  But it wasn't secure enough that I could check it as luggage; it would have arrived as a huge bag of china shards.

So I had to lug the bag around with me at Fort Lauderdale Airport, and at my transfer airport, and at Oakland Airport.  All while being pushed around by very nice airport personnel who were very, very annoyed (but tried to keep a good face) that I had this big bag of china on my lap during the entire time.  I explained to each of them that I was very sorry, that my grandmother had insisted I had to pick up the china now, that I didn't want to do it right after my surgery.  I don't think it helped a lot.

But the good news is that the china and I arrived safely and in one piece back at Oakland Airport.  I managed to get home also.  I don't remember if I drove or had a shuttle pick me up; it was likely a shuttle, because the surgery was on my right foot, and I don't think I was ready to drive yet.  But we made it.

And I still have the set.  I brought it to Oregon with me.  Only a couple of pieces have been broken over the years I've owned it, one being the gravy boat.  I think I lost one of the small plates also.

And I use it for my Passover seders, although I don't keep kosher.  Bubbie stopped keeping kosher after her father-in-law passed away, which was in 1953, so the dishes were already trafe by the time I got them.

And now that I've written all of this up, I'll print out ths post and include it with the dishes, so I have documented them and why they're important, just as I did with the silverplate flatware that used to belong to my great-grandmother.

Addendum, March 15, 2021:  This is the gravy boat I received today from a very generous reader, to replace the one I broke several years ago.  Thank you so much!

Second addendum, August 7, 2021:  I found out that the person who bought the replacement gravy boat for me was not the person who shipped it but my own sister in Pennsylvania.  It took her a while to let me know.  And now I know that she actually reads my blog!