Two World War I Sites Looking for Relatives of Prisoners 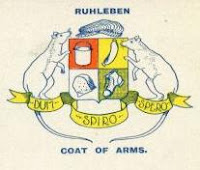 Two Web sites dedicated to World War I camps are looking for relatives of people who were detained there.  Faces of Holzminden commemorates Holzminden Officers' Camp, which was in Kaserne Holzminden, Lower Saxony, Germany.  From September 1917 to December 1918, more than 550 Allied military personnel and merchant marines from locations in the British Empire were confied in the camp.   A researcher has compiled a list of more than 350 of the prisoners so far, but they want to have as complete a list as possible.  The current updated list of internees can be downloaded from the site.  A book and a movie are being planned related to the camp and events there.

The Ruhleben Story is dedicated to the civilians who were held at a prisoner of war camp at Ruhleben racecourse, near Berlin, Germany.  This camp existed from 1914-1918 and housed British civilians and merchant seaman, plus people of other nationalities who had British connections.  The known list of prisoner names is spread over twelve Web pages.  Christopher Paton, the creator of the site, welcomes more information about the camp and those who were imprisoned there.
Posted by Janice M. Sellers at 7:29 PM